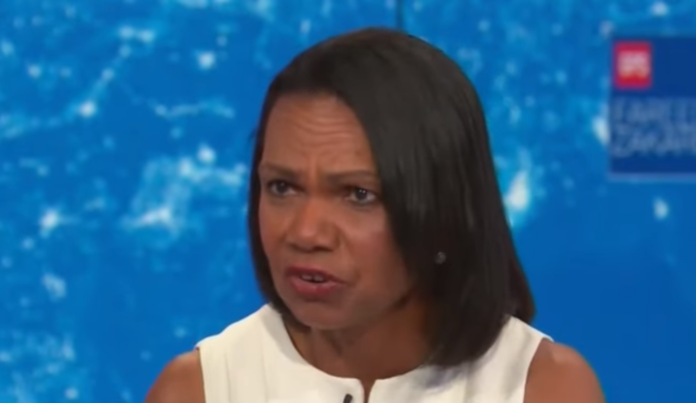 During an appearance on CNN, host Fareed Zararia asked Rice about Trump telling Democratic congresswomen to “go back” where they came from and claiming there were “good people” among the neo-Nazis and white supremacists who marched in Charlottesville:

“When you hear Trump, this is a repudiation of everything you were trying to do.”

And then Rice began to try and shift the blame:

Zakaria, however, followed up by asking:

“But by saying that, do you have a responsibility to not just pretend there is an equivalence here?”

Once again, Rice tried to play both sides against the middle:

“People have to make their own determination. I think there’s an argument that we have a president of the United States and you’ve got to try to fight for the right things from whatever perch you have, within, without — however you with to do it.

“The reason that I specify all of our responsibilities, is if we just point the fingers at 1600 Pennsylvania Ave., we’re not going to solve this problem.”

But isn’t the president, as leader of the country, supposed to set the tone for the nation? Or have we abandoned that notion as an excuse for Trump’s abysmal words and actions? And if we have, what exactly does that say about anyone willing to give Donald Trump a pass when it comes to being a decent human being?