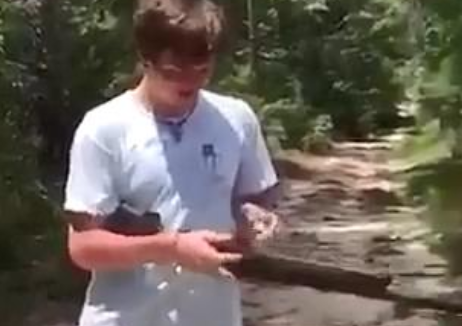 Authorities in South Carolina thwarted a potential mass shooting by a Catholic school student who apparently aspired to be a white nationalist terrorist, and parents are blaming President Donald Trump for teaching their kids to be racist.

A 16-year-old student at Cardinal Newman School in Columbia, South Carolina posted videos of himself declaring that he hates black people and shooting a shoebox containing a pair of Nike shoes from the Michael Jordan brand.

Several of his classmates received the videos and they were used as evidence to get the boy expelled but not arrested by local law enforcement.

“Law enforcement immediately began an investigation into whether the racist videos that evening constituted a criminal act and determined they did not,” school Principal Robert Loia said in a letter to parents.

But in another video sent to students, the boy threatened to “shoot up” the school. And that video was enough to get him arrested.

“It was brought to our attention that videos were being distributed among students,” Richland County Sheriff Leon Lott said. “We worked very closely with the school to identify the students involved.”

The arrest came just weeks before a white nationalist gunned down 22 people in El Paso over the weekend and cited Trump’s racist anti-immigrant rhetoric in his manifesto.

After that shooting, an angry parent of a student in the Columbia community posted the videos on Twitter and hammered Trump for teaching racism to kids in a pair of tweets that have since been removed for supposedly violating the rules.

“This video landed on my daughter’s phone last night,” Annabelle Robertson wrote. “It was being shared among her peer group in Columbia, SC. After reports to police, the rising 11th grader was reportedly expelled from Cardinal Newman Catholic School. This is the second video made by a local rising 11th grader. (It landed on my daughter’s phone but has been reported to the police.) People MUST understand the ramifications of teaching their child—or even allowing—#racism to go unchecked. And the #RacistInChief needs to STOP.”

Here’s the video of the student pretending to shoot at black people.

So, according to Twitter, the videos she posted to raise awareness violate the rules and are removed, but Trump still has his Twitter account and can say whatever he wants without consequence even though the rhetoric he uses is racist and incites mass shootings. Twitter seriously needs to reevaluate their priorities.

Because if some of these young white people had not been hearing or reading Trump’s hateful and bigoted rhetoric, perhaps we would not be burying 22 people in El Paso right now and this South Carolina student would still be in school learning math and science instead of learning how to be a racist terrorist.