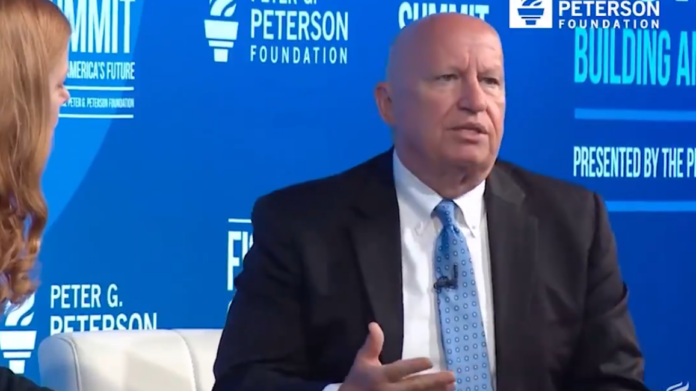 When they were trying to get their tax cut (aka tax scam) bill passed in 2017, Republicans in Congress, along with the White House, swore that the package of tax reductions for the wealthiest Americans and largest multinational corporations would pay for itself by creating so much economic growth that the tax base would expand.

Now, however, two years later, the so-called “Tax Cuts and Jobs Act” has added $2 trillion to the national debt and failed to create the massive growth in the American economy that was promised.

As the chief author of that tax bill, Rep. Kevin Brady (R-TX) admitted Tuesday at the Fiscal Summit, we won’t even know the full cost of the bill until a decade has passed. Brady remarked:

“We will know in year 8, 9 or 10 what revenues it brought in. I don’t think anything could have been worse for the deficit than to stick with the old economy and stick with the tax code that was so outdated.”

KEVIN BRADY says Republican tax law of 2017 is not fully paid for:

“We will know in year 8, 9 or 10 what revenues it brought in … I don’t think anything could have been worse for the deficit than to stick with the old economy and stick with the tax code that was so outdated” pic.twitter.com/fvEiUqiyUj

That is classic double talk. Promise something and then admit later you cannot possibly know the end result, even though you said you knew what would happen when you were shilling for the legislation.

Want to see the result of the tax scam bill? Here is it: The U.S. posted its biggest monthly budget deficit on record in February, spending $234 billion more than it took in. That’s a 46 percent larger deficit than the government saw for the entire year of 2007.

Here’s another figure that shows you what a massive failure the tax cut has been: The federal deficit grew 77 percent in the first four months of fiscal 2019 compared to the same period last year. Meanwhile, tax revenue fell $19 billion.

Kinda hard to balance a budget with numbers like that.