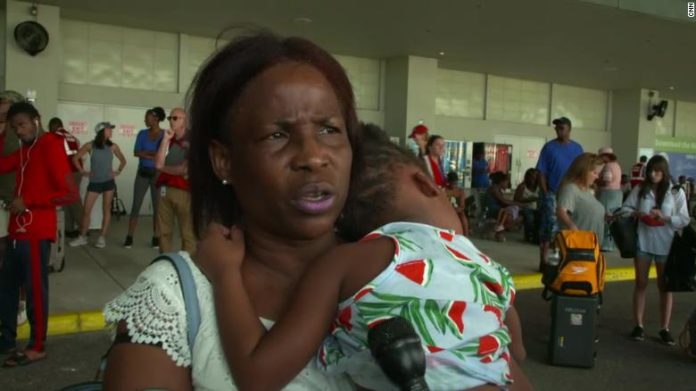 Refugees from the Bahamas, which was devastated by Hurricane Dorian, were told they would have to get off the ferry transporting them to the United States if they didn’t have a valid U.S. visa, according to the Washington Post:

Hundreds of Hurricane Dorian survivors crowded into a ferry anchored in Freeport, Bahamas, on Sunday evening, after days on the sweltering islands with limited food, water and power. Just 2½ hours across the ocean, safety and relief waited in Fort Lauderdale, Fla. Then, an announcement blared from the boat’s intercom speakers.

“Please, all passengers that don’t have a U.S. visa, please proceed to disembark,” a crew member said in a video captured on board.

The 100 or so refugees who were turned away said they didn’t understand why they had been denied entry into the U.S. Renard Oliver told Brian Entin of Miami television station WSVN:

“At the last minute like this, it’s kind of disappointing. It’s hurtful because I’m watching my daughter cry, but it is what it is.”

Asked about the incident, U.S. Customs and Border Protection (CBP) blamed the ferry operator, Balearia Caribbean, for the mix-up, claiming they didn’t coordinate with government officials. In a statement, CBP had this to say:

“CBP was notified of a vessel preparing to embark an unknown number of passengers in Freeport and requested that the operator of the vessel coordinate with U.S. and Bahamian government officials in Nassau before departing The Bahamas.”

Just interviewed @CBPFlorida when we got off ferry in FL. They say they would have accepted and processed the Bahamians, and blame the ferry company Balearia. CBP says they tried to coordinate with Balearia but company “made a business decision” to take the evacuees off the boat. pic.twitter.com/ONkgdcJvS3

But crew members on the ferry told a different story:

A little more from crew on the ferry. They say they were told it was ok to accept Bahamian evacuees with passport and copy of police record. They boarded boat. Then when they sent manifest to US Customs and Border Patrol — they were told those without visas would not be accepted.

“Incoming images and media reports indicate that thousands of homes have been destroyed and the basic infrastructure of many communities simply no longer exists. Perhaps one of the most basic yet meaningful steps our government can take immediately is to ensure that those who have lost everything, including family members in some instances, are provided the opportunity for shelter and reunification with family in the United States.”

The official death toll in the Bahamas from Hurricane Dorian is 43, but that number is expected to rise dramatically as officials survey the destruction. Mark Green, the administrator for the U.S. Agency for International Development, said the islands looked like they had been “hit by a nuclear bomb.”