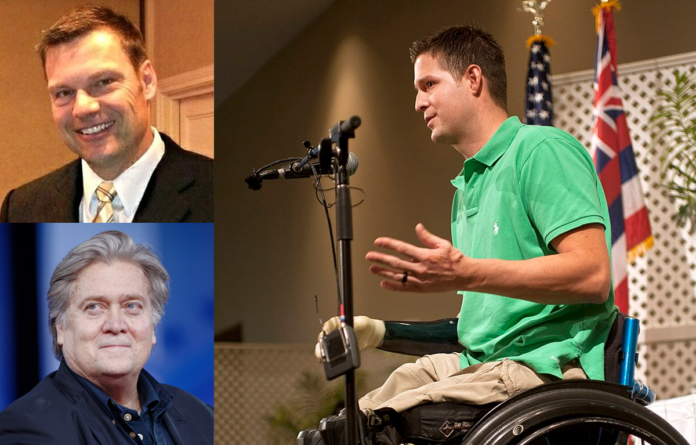 The long saga of US veteran and triple amputee Brian Kolfage and his attempts to construct a wall on the southern border have met with another roadblock. City officials handed a “cease and desist” order to the owners of private property where Kolfage started to build. The construction was proof of making good on his promises to at least 273,446 GoFundMe donors. Kolfage has been widely criticized –even by conservative media – after he changed tactics on the GoFundMe.

Back in January, we reported that GoFundMe was going to refund everyone who donated to the We Fund the Wall campaign because it would not reach the goal of $1 billion dollars. So Kolfage changed the name of the project to We Build the Wall, asking everyone who received donations to redirect their money. The irony of the new name is palpable as Trump originally promised Mexico would pay for the wall.

The move gave the project nonprofit status and conservative outlet The Daily Caller questioned if the veteran would be taking a salary from donor funds.

Trump supporters clearly are frothing at the mouth for some evidence of a wall on the southern border, incomplete segment or not, so the donations streamed into Kolfage’s GoFundMe once more. To date, he’s raised over $23 million of the 1 billion goal with a picture of Trump giving the thumb’s up and a stamp reading, “Trump approved.”

In early May, the Daily Beast called out the project, noticing that there was as of yet no signs of progress on a wall. The Washington Post noted that Kolfage responded, claiming he could not reveal the locations where his non-profit had decided to build. He assured his donors that “the project is moving forward.”

“I wish I could name where it’s at, but we can’t name it because of the ACLU, these other liberal groups who want to sue us and impede our progress,” said Kolfage.

Just in time for Memorial Day weekend, Kolfage managed to get a wall started in Sunland Park, New Mexico, even though it’s not exactly on the border. The El Paso Times reported that the property is owned by American Eagle Brick Company near Monument One, the spot where New Mexico, Texas and the Mexican state of Chihuahua converge. A government built barrier is nearby but did not extend into the area because of rough terrain which some have noted is a natural barrier on its own.

NEW: "We Build the Wall," a nonprofit founded by Air Force veteran Brian Kolfage and headed by Steve Bannon, built a mile-long section of border wall near El Paso — secretly, on private land — over the Memorial Day weekend https://t.co/sMn5q7k8WR by @melissarossi199 pic.twitter.com/0M2rGr2NQc

North Dakota construction company Fisher Industries began construction on a 20-foot tall wall that extends 7 feet into the ground and runs for a half mile. It’s the same company Trump urged the Army Corps of Engineers to use.

“It’s protest wall,” Kolfage said. “We are standing up. We are saving lives. It’s stopping the flow of drugs and illegal migrants.”

As construction began, We Build the Wall saw an increase in donations, with as much as $600,000 coming in according to Kolfage.

Then the city protested.

Although the project was expected to be completed by Wednesday, the city clamped down and construction was halted by Tuesday. What makes this particularly poignant is that Kolfage and his general counsel, Kris Kobach began trumpeting about their success shortly after construction.

Kobach appeared on Fox and Friends to exalt the project.

“This shows collectively how we the people can say, ‘You know what? This isn’t rocket science. We can solve this problem,’” Kobach said as he showed off the wall on Monday. “And when a whole bunch of people chip in money, you can accomplish something like this.”

“The project doesn’t have proper permits to proceed because an application filed was incomplete.”

“The rules apply to everyone,” Ibarbo said. “That’s the process.”

At the same time, Mayor Javier Perea told the press that the wall was too high, which is hilarious because the whole premise of a border wall depends on the illusion that it will stop people from migrating.

“My understanding is that city ordinance only allows a wall up to six feet tall, and this far exceeds that,” said Mayor Perea.

The real purpose of the “protest wall”

Kolfage responded to the criticism by suggesting political motives. He acknowledges people are already having a fit about the construction.

“What we really think it is, we think it’s a political issue. People are raising a fit about this. People don’t like that it’s happening,” Kolfage said. “That’s why we waited as long as we did to file the paperwork.”

As if Donald Trump’s image plastered all over the project isn’t obvious enough, We Build the Wall is definitely political in every way. It’s common sense that a segment of a wall is not going to prevent migration across a 2,000-mile border, but it might help prop up Trump to his racist followers as he fails to secure funds through Congress.

Steven Bannon, the former White House Chief Strategist is leading the project. Bannon admitted that he knew the local residents were “gonna freak out” about construction and that “We had to catch them by surprise,” echoing Kolfage.

El Paso elected officials have condemned the project as racist and “a symbol of hate.”

“It’s deeply disturbing when outsiders, like Kris Kobach and Steve Bannon, come in and use our community and people as a backdrop to further their racist agenda,” she told The El Paso Times in a statement. “It’s even more disturbing that a business in our community is furthering this xenophobic narrative. While this wall may be necessary fuel for the president’s political campaign, it will not prevent people from seeking asylum.”

A mile-long wall went up on private property along the border over the weekend.

Who paid for it?

Now Trump may make him the “immigration czar,” and possibly the next secretary of homeland security with his own private jet if he gets what he’s demanding.

Intervening on Kolfage’s behalf, Kobach says the city inspector green-lighted construction of the wall and then suddenly changed course. The city manager says they are just following the book without any political motivation.

Hours ago, Kolfage updated his Facebook page, stating that the city permits were re-issued. The group claims the mayor has given permission to resume construction.

Meanwhile, the Florida Department of Agriculture is investigating the We Build the Wall fund after receiving consumer complaints according to a report from CBS This Morning. (see video below)

“We have an internal audit committee and we have an external audit agency,” Kolfage told reporters at CBS. “We can’t spend any money without getting approval.”

Kolfage admits that his efforts are not to build an entire southern border wall, but to build what he can with the money raised. Roughly 1,279 miles of the 2,000 mile-long border remain without a wall but that doesn’t seem to matter as long as Trump’s supporters see any evidence of construction going on.

We Build the Wall may as well build a tiny model and take pictures. After all, it would have the same practical effect.

At the southern U.S. border, a group says it's moving ahead with plans to build a private border wall in southwestern New Mexico. It’s using millions from a crowdfunding campaign to close a border gap that the group says is popular with asylum-seekers@DavidBegnaud reports. pic.twitter.com/iqqVlW1h4O