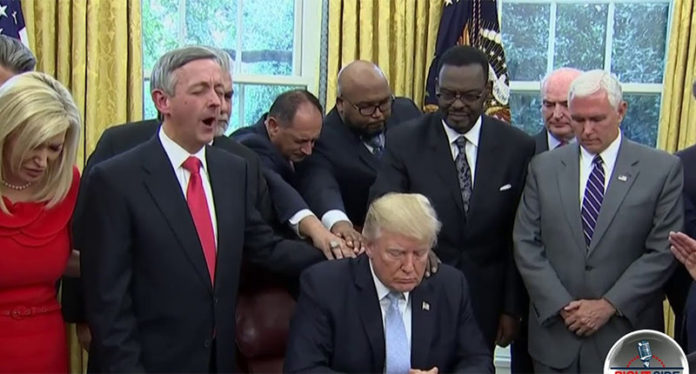 Evangelical Christians continue to offer their loyalty to President Donald Trump, even though he may well be the most immoral man to ever hold elected office in this country, and now even his 2020 campaign manager is suggesting that God send Trump to save the United States.

Loved watching the crowd fill up for the 547th Rally in Green Bay. There has never been and probably never will be a movement like this again. Only God could deliver such a savior to our nation and only God could allow me to help. God bless America! pic.twitter.com/PBata3mB14

But Amanda Tyler, executive director of the Washington-based Baptist Joint Committee for Religious Liberty, isn’t buying the hype for one second, telling Politico:

“Christians should beware of a political use of the word ‘savior,’ which goes to the very heart of our faith. This particular statement is a gross expression of Christian nationalism, which I define as equating Christian and American identities. People of faith know that God is much larger than any one candidate, party, election or country.”

Even Jerry Falwell Jr., who is one of Trump’s staunchest supporters in the evangelical community, is reluctant to say that God put Trump in the White House:

“If you give God credit for a good president, then you’ve got to blame God when you have a bad one. So I don’t think that’s the way to look at it. I don’t think you can say that God gives us good leaders. What do you do when you get a bad one, say, ‘God messed up’? That’s silly.”

And yet that hasn’t stopped others in the Trump administration from trying to claim the mantle of heaven for their dear leader. The usually sober and serious Secretary of State, Mike Pompeo, speculated that Trump might have been sent to protect Israel from Iran:

“Could it be that President Trump right now has been sort of raised for such a time as this, just like Queen Esther, to help save the Jewish people from the Iranian menace?

“As a Christian, I certainly believe that’s possible.”

On the extreme end of the spectrum you have White House Press Secretary Sarah Sanders, who said earlier this year that Trump was handpicked by God:

“I think God calls all of us to fill different roles at different times, and I think that he wanted Donald Trump to become president.”

All of this language, presidential historian Timothy Naftali notes, it meant to keep Christian voters in the GOP’s corner:

“What these political lieutenants are saying to the faithful is that, ‘You have no choice; God has told you how you must vote.’

“Republican administrations historically have talked about individual rights, the autonomy of the individual, preventing government from dictating political choice. By bringing the sacred into politics, they are actually imposing a view onto his followers and depriving them of a freedom of choice.”

Then again, if these so-called Christians believe so fervently in God, have they considered the possibility that another, less benevolent power — perhaps one that was allegedly cast out of heaven for excessive pride — might also have played a role in helping elect Donald Trump? And if that’s the case, do evangelicals have the old excuse that the devil made them do it?