The United States Blues
Home National News Barbara Bush was so horrified by Putin-endorsed Trump she disavowed the Republican... 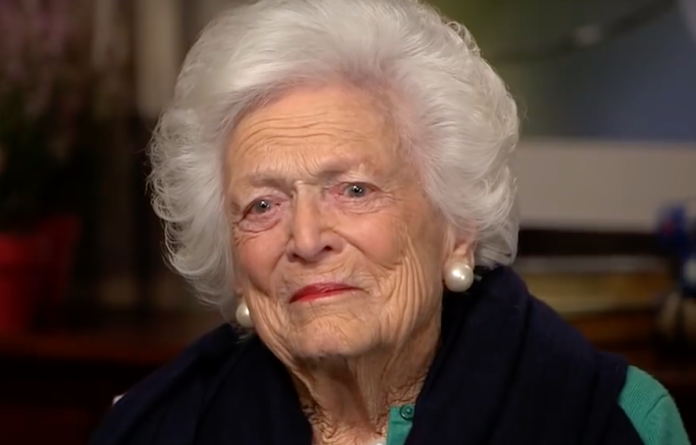 “I woke up and discovered, to my horror, that Trump had won,” Bush said of Trump’s shocking election win.

Author Susan Page, the Washington Bureau chief of USA TODAY, is releasing a new book: The Matriarch: Barbara Bush and the Making of an American Dynasty. Page got firsthand interviews and unprecedented access to Bush’s personal diaries over the last six months of her life.

The book, which comes out April 2, makes it crystal clear how much Bush was disturbed by Trump. She was extremely distressed over Trump’s behavior and his revolting attacks on her presidential candidate son, Jeb, who he repeatedly called “Low energy Jeb”, “an embarrassment to the Bush family,” and “Jebra.” Jeb accurately referred to Trump as a “chaos candidate.”

“Jeb is an embarrassment to himself and his family, and the Republican Party has essentially — they’re not even listening to Jeb,” Trump said.

According to USA TODAY:

Remarkable Barbara Bush comments to @SusanPage, including that she blames Trump for what she called her heart attack and upon death no longer considered herself a Republican https://t.co/IstucvRQQw

“It wasn’t technically a heart attack, though she called it that. It was a crisis in her long battle with congestive heart failure and chronic pulmonary disease that hit her like a sledgehammer one day in June 2016. An ambulance was called to take her to the hospital. The two former presidents who had been at home with her that day, her husband and her oldest son, trailed in a car driven by the Secret Service. The tumultuous presidential campaign in general and Trump’s ridicule of son Jeb Bush, in particular, had riled her. ‘Angst,’ she told me.”

Although both Jeb and his mother felt extreme “angst” about Trump’s insulting and degrading behavior, Jeb encouraged Barbara Bush to tune it out and let go.

Nevertheless, Barbara Bush’s concern about where Trump would take America as president remained. So much so that she decided by February 2018 that she no longer considered herself a Republican. The party was no longer one she could identify with.

“Did she still consider herself a Republican?” asked Page.

“In an interview with me in October 2017, she answered that question yes. When I asked her again four months later, in February 2018, she said:

After Barbara Bush decided to help Jeb with a campaign ad, Trump attacked him on Twitter again.

“Jeb—mom cannot help you with ISIS, the Chinese or with Putin,” Trump tweeted.

According to Page, Bush was outraged that Trump would dare bring up Putin, who she clearly recognized as a murdering dictator and not someone to admire, unlike Trump.

Barbara Bush's dislike of Trump dated back to the 1990s, when she wrote that he was greedy, selfish and ugly. https://t.co/xU7P9wp5fC pic.twitter.com/gQi7yDij0z

Barbara voted for her son in the election, although he was not in the race. Her husband, however, broke with the party and voted for Clinton.

Maybe most telling of all, Barbara Bush kept a “Trump countdown clock” in her bedroom, taking it with her from Kennebunkport to Houston. The gift from a friend displayed the remaining time left in Trump’s term.

See Barbara Bush and Jeb talk about Trump below:

“I don’t know how women can vote” for Trump.