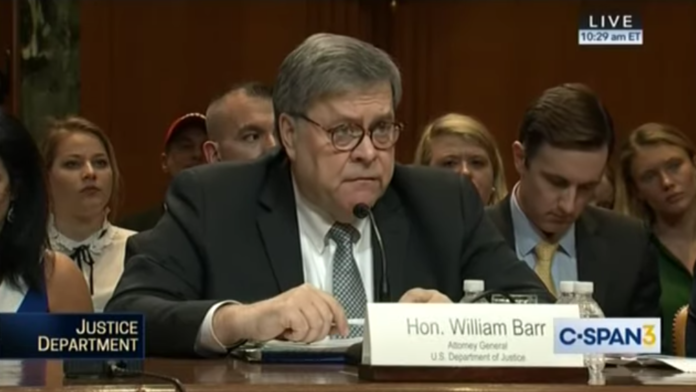 The House Appropriations Committee ripped Barr a new one on Tuesday for hiding the Mueller report. But the Republicans control the Senate version of the committee, so he had a much friendlier audience to play to this time around.

And even though Trump’s repeated accusations that the FBI spied on his campaign have already been thoroughly debunked after a review of documents, including by former Rep. Trey Gowdy (R-S.C.), Barr revived it while being grilled by Senator Jeane Shaheen (D-N.H.).

Shaheen wanted to know why Barr formed a team to look into the FBI and the process that led to the Russia investigation.

“Well, you know, for the same reason we’re worried about foreign influence in elections,” Barr replied. “We want to make sure that during — I think spying on a political campaign is a big deal. It’s a big deal.”

“There were a lot of rules put in place to make sure there’s an adequate basis before our law enforcement agencies get involved in political surveillance,” Barr continued. “I’m not suggesting that those rules were violated, but I think it’s important to look at that, and I’m not talking about the FBI necessarily, but intelligence agencies more broadly.”

Ever since Special Counsel Robert Mueller submitted his report, Trump has been demanding an investigation into the probe’s origins, and it looks like Barr is complying even though Trump’s claim of spying has been debunked.

Shaheen could not believe what Barr just said to her, and that’s representative of most of the country since it has been established that the FBI conducted proper surveillance based on significant probable cause that Russia had infiltrated Trump’s campaign. Mueller’s report would go a long way toward answering if Russia did infiltrate the campaign, but Barr won’t release it.

Barr then explained his decision to start his witch hunt.

“The question was whether it was adequately predicated,” he said. “I’m not suggesting it wasn’t adequately predicated. I need to explore that, I think it’s my obligation. Congress is usually very concerned about intelligence agencies and law enforcement agencies staying in their proper lane. I want to make sure that happened. We have a lot of rules about that.”

Barr is clearly nothing more than Trump’s personal attack dog and fixer who hides reports to protect him and opens investigations into whatever or whoever Trump wants him to go after, even if it has been repeatedly proven that no wrongdoing was committed. But it’s no surprise since he auditioned for his position by clearing Trump in a memo and called for an investigation against Hillary Clinton long before Trump ever nominated him to his post.