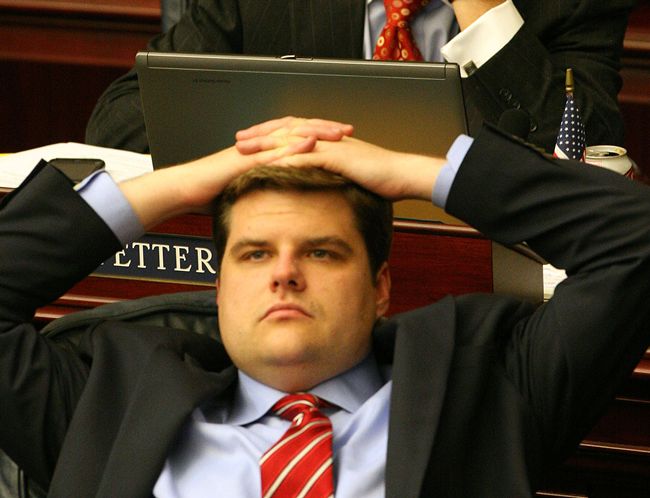 According to Rep. Matt Gaetz (R-FL), who has long been one of President Donald Trump’s most ardent (and unhinged) supporters in Congress, the apparent suicide death of former financier and sex offender Jeffrey Epstein is proof positive that the investigations being conducted by House Democrats into the possible connection between Trump and Russia need to end ASAP.

Yes, he actually said that.

Responding to a tweet from Rep. Alexandria Ocasio-Cortez (D-NY), who had reacted to Epstein’s death by noting “We need answers. Lots of them,” Gaetz posted this:

Chairman @RepJerryNadler should prioritize a Judiciary investigation into how Jeffrey Epstein died in federal custody (in Nadler’s own neighborhood!) over the Kavanaugh confirmation (which already happened), and the Russia hoax (which never happened).

Rest assured, Congressman Nadler will continue his impeachment inquiry into the president, and he may also conduct an investigation into the death of Epstein, which he has every right to do since Congress has oversight on the Department of Justice, who had custody of Epstein when he died.

But here’s what makes Gaetz’s suggesting even more absurd: He wants the judiciary committee to take a close look at Donald Trump’s connections to Epstein? That’s probably not such a great idea when you consider that documents allege Epstein recruited one of his young victims at Mar-a-Lago.

Republicans are terrified of what Nadler and House Democrats are going to find regarding the president’s many connections to and business dealings with Russia. They’re trying to think of anything possible they can use to derail the impeachment inquiry. But they’re doomed to failure, and that could wind up proving politically devastating for both Trump and the GOP.