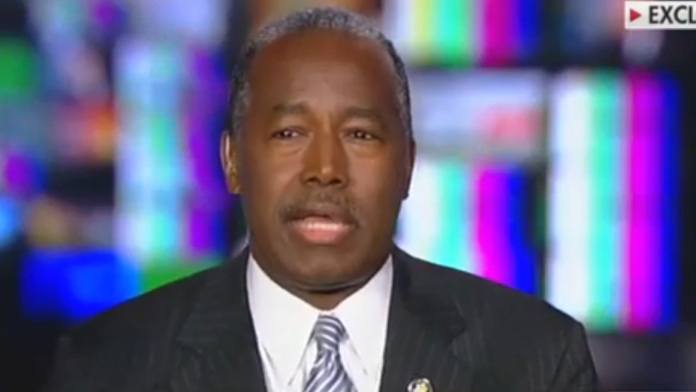 While he loves to say that the economy is doing fantastic under his leadership, not everyone is benefiting with President Donald Trump in office. And even a member of his administration admitted that some are being left behind.

Secretary of House and Urban Development Ben Carson was a guest on Fox host Maria Bartiromo’s show Sunday morning, and was asked by her about a recent report showing that home ownership among blacks is down significantly while the Hispanic home ownership is rising.

Rather than simply acknowledge the fact, Carson blamed the decline on the lack of “wherewithal in terms of financial knowledge” during the Bush administration, which ended 11 years ago:

“People took advantage of a lot of people who did not have a lot of wherewithal, in terms of financial knowledge about housing. And you know, by manipulating debt-to-income ratios and the various types of manipulations for credit that were done, they put people into houses that they couldn’t afford.”

But that doesn’t full explain why home ownership among African-Americans continues to decline, especially at a time when Trump is repeatedly bragging about how black employment is at an all-time high. If people are working, why aren’t they buying homes in the miraculous Trump economic boom?

Carson did note, however, that owning a home usually reflective of a higher income:

And yet, Carson offered zero in the way of policy proposals to address the issue.

As ThinkProgress notes, many black Americans are getting left behind during the Trump administration:

The 1968 Fair Housing Act banned racial discrimination in housing decisions. While black homeownership rose for decades after the law’s passage, it has declined to pre-1968 levels in recent years and continues to get worse under Trump.

When the issue of racism came up, Carson fell back on administration talking points:

“Look at the policies that have been done and look at the people who have been helped. You know, black unemployment at the lowest level ever.”

You mean like the people who can’t afford to own a home and are falling further behind? Yeah, they’re not exactly celebrating these days, Mr. Secretary.