The United States Blues
Home News Ben Sasse gets decimated for betraying his principles to vote in support... 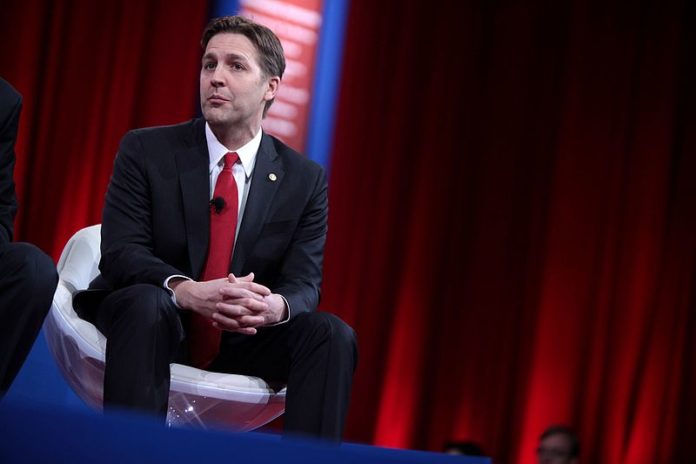 Senator Ben Sasse (R-Neb.) had a chance to put his money where his mouth is on Thursday when a resolution of opposition against President Donald Trump’s national emergency declaration came up for a vote. But he failed miserably and betrayed his principles.

The resolution passed the Senate 59-41, setting up a Trump veto that as of now doesn’t have the votes for an override. And while 12 Republicans joined Democrats to do the right thing, Sasse was not one of them.

Along with Senator Thom Tillis (R-N.C.), who cowardly reversed himself after writing an op-ed declaring his intent to defend the Constitution by voting for the resolution, Sasse also voted in opposition despite constantly claiming to be a principled conservative who opposes executive overreach.

In a desperate attempt to explain himself, Sasse released a statement.

“I think that law is overly broad and I want to fix it, but at present Nancy Pelosi doesn’t, so I am therefore voting against her politically motivated resolution,” he said, conveniently ignoring that Trump’s national emergency declaration is “politically motivated” and unconstitutional.

After years of criticizing former President Barack Obama for alleged instances of executive overreach, which many conservatives claimed made Obama a “tyrant,” Sasse had no problem letting an authoritarian president continue his onslaught on our democracy, the rule of law, and the separation of powers.

In short, Sasse is not only a hypocrite, he’s a Trump stooge.

And Twitter users threw the book at him for it.

I’m not surprised that Ted Cruz supported Trump’s power grab. But I am surprised and disappointed by Ben Sasse. https://t.co/7Ji3rlnV56

An easy call, @bensasse – you vote like a constitutional conservative, or…you aren’t one. https://t.co/43lRdFoGMJ

I appreciate Jonah’s words here. I also admire and appreciate @BenSasse, but I strongly disagree with this vote. https://t.co/D3DiGsDCqT

Words cannot adequately capture my disgust for senators like @BenSasse who cast aside their principles and even their personal dignity to vote for Trump’s bogus emergency. Disgrace that should haunt them for the rest of their political careers. #Craven

Amazing. All of Ben Sasse’s tilting at respectability, all of his claims to be and want something better – couldn’t bring himself to mean it. https://t.co/ljIeT9xZAI

Chickenshit statement by @BenSasse. This isn’t about Pelosi. It’s about the Constitution. https://t.co/BsBRwmsxG7

I think there is no one more disgusting in congress than @BenSasse. He either needs to stop pretending he has principles and stop lecturing the country, or stand up for what he professes to believe in.

Shame, @BenSasse . Shame. I’ve been listening to your pithy lectures on Congress giving away it’s powerful a couple of years now, and when you have a chance to vote on it, you fold. https://t.co/z5L1tZUXYc

This might be the most @BenSasse statement ever and it’s total weaselly bullshit. Either take a stand, or don’t. Either make the case for Trump, or don’t. But don’t cave and then act like it’s the principled decision. https://t.co/VDW2IcHQS7

Count on @JRubinBlogger to call out the hypocrites: @BenSasse, @SenCoryGardner, and @SenThomTillis. Those three GOP Senators just gave up their standing to claim the high ground of constitutional principle. All three should be defeated in 2020. https://t.co/WJ7zkmh2Fv

The progressive equivalent of what @BenSasse just did is if Bernie Sanders was like actually nevermind the poor don’t need health care.

This is disheartening.
He has no excuse.
He knows better. https://t.co/kIArt7m7MY

Ben Sasse revealed his true colors with this vote and now the entire country knows he’s a fraud who will get on his knees for Trump. He just destroyed his own legacy and humiliated himself while sacrificing America and the Constitution to protect a real tyrant. He should be ashamed.