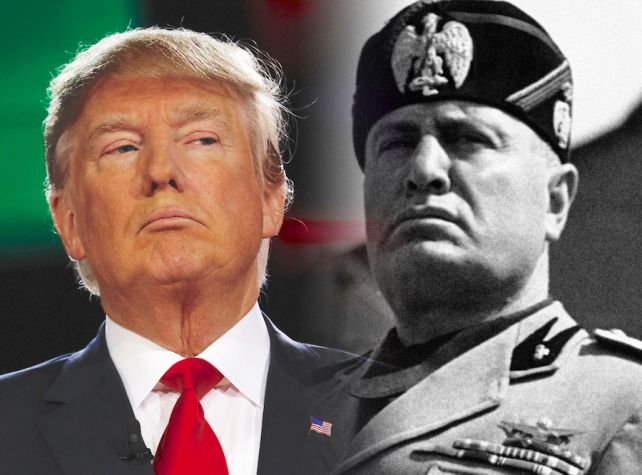 It’s a question that’s often been asked about our current president: Is Donald Trump a fascist?

Actor Jim Carrey has decided that he is, and he decided to post this reminder of what has happened in the past to fascist leaders:

If you’re wondering what fascism leads to, just ask Benito Mussolini and his mistress Claretta. pic.twitter.com/uc2wZl0YBu

If you know anything about history, then you know that former Italian fascist dictator Benito Mussolini and his mistress, Clara Petacci, were caught in the final days of the Second World War as they attempted to flee to Switzerland. They were caught by Italian partisans, executed by firing squad, and their bodies hung upside down at a service station in Milan for all to see.

The granddaughter of the Italian dictator, Alessandra Mussolini, an Italian politician, saw Carrey’s post and was apparently offended, responding to him with a series of tweets about American atrocities:

Hi @JimCarrey now draw this for us pic.twitter.com/tDZ9RB1WLm

And now @JimCarrey draw this other … pic.twitter.com/0tfwUDImYi

I think @JimCarrey should draw that too pic.twitter.com/2oIwvL1KyU

Hi @JimCarrey do you know the history of #RosaPark? pic.twitter.com/tVbvqISt2N

There’s just one problem with Ms. Mussolini aiming those tweets at Jim Carrey: He’s a Canadian! Does this woman even know how to perform a simple Google search?

And then Mussolini made the connection between her grandfather and the person she clearly thinks is most like Il Duce: Donald Trump, sending out this:

President @realDonaldTrump doesn’t have to worry about poor @JimCarrey politica attacks; his drawings are only dirty paper

So now we have the granddaughter of Benito Mussolini defending the honor of Donald Trump, meaning that fascism has now come full circle and stands before us exposed for all the world to see.

Is Donald Trump a fascist? Well, when the relative of one of the most well-known fascists in in world history insists on coming to your defense, it doesn’t take much of a leap to make the connection, now does it?