The United States Blues
Home Politics Congress Beto O’Rourke: Trump’s ‘racist’ rhetoric leads to massacres like the one in... 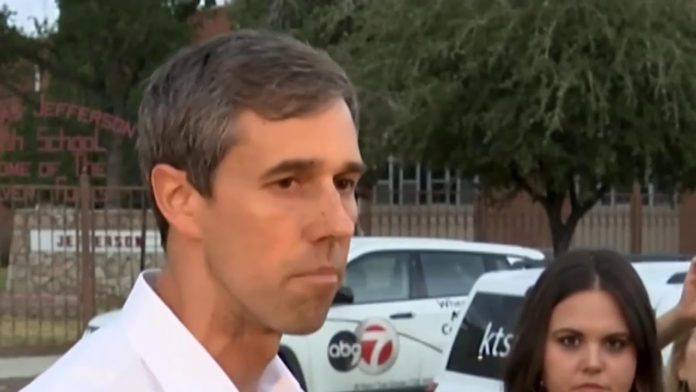 On Saturday, hours after a mass shooting in El Paso left 20 dead and dozens more wounded, Democratic presidential candidate Beto O’Rourke — who represented El Paso when he served in the House of Representatives — said President Donald Trump has to take some of the blame for the deaths.

“Sir, regarding the manifesto and everything that was in it, fears about Hispanic immigration, all that, does any of this fall at the feet of President Donald Trump and his rhetoric that’s been growing turnover last couple weeks and his alleged racist Tweets and other rhetoric?”

“We’ve had a rise in hate crimes every single one of the last three years, during an administration where you have a president who’s called Mexicans rapists and criminals.

“He is a racist, and he stokes racism in this country. It does not just offend our sensibilities; it fundamentally changes the character of this country and it leads to violence.”

O’Rourke concluded his remarks by noting:

“Again, there are still details that we are waiting on, but I’m just following the lead that I’ve heard from the El Paso police department where they say there are strong indications that this shooter wrote that manifesto and this was inspired by his hatred of people here in this community.

“Folks, this did not happen by accident. We cannot pretend this is our future, our fate, our fortune. This is owed to the rhetoric used by someone to gain political gain, to make us afraid.”

#BREAKING I just asked @BetoORourke if @realDonaldTrump is at all responsible for today’s mass shooting in #ElPaso He said yes and added that in his opinion, the President is indeed a racist. @abc7breaking @ABC pic.twitter.com/wA3iB3uLFN

Indeed, as NBC News first reported on Saturday, the suspect in the El Paso mass shooting did indeed post a racist, xenophobic screed on 8chan, an extremist website. Reporter Ben Collins had this to say about that posting:

“It’s three pages of hatred against immigrants and people, you know, view it basically as invaders to the United States where they believe — and people generally on this extremist forum where these people get radicalized — believe that there is only so much space or only so many jobs in this country and it’s being replaced by Mexican immigrants, and in his case, he also believed in automation.”

Calling immigrants invaders and blaming them for the loss of jobs. Sounds oddly familiar, doesn’t it? That’s probably because it’s exactly the sort of thing Trump has repeatedly uttered or tweeted in his push to get money for his border wall or to mobilize his political base.

Trump has yet to call the El Paso shootings what they are: Terrorism. He only does that when the suspect is a person of color.