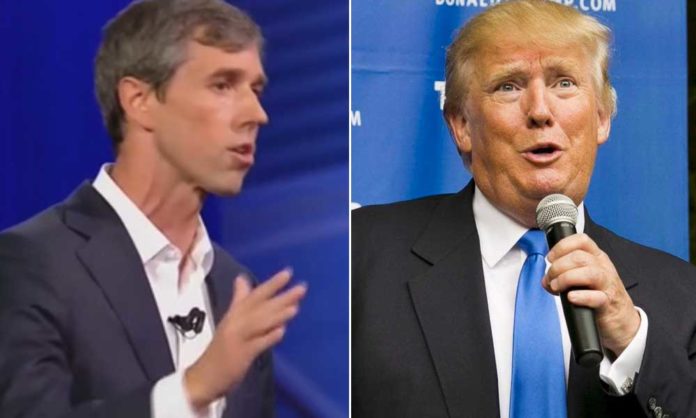 Whether he wins the Texas Senate seat currently held by Ted Cruz (R-TX) next Tuesday or not, Rep. Beto O’Rourke (D-TX) has become a national political figure over the course of the past few months, and is even being talked about as a possible candidate for the Democratic presidential nomination in 2020.

During a town hall meeting on the MSNBC show “Hardball” Tuesday evening, O’Rourke was asked about President Donald Trump’s recent moves in the closing days of the election to demonize immigrants and send thousands of U.S. troops to the border. O’Rourke called Trump’s moves “ridiculous,” noting:

“This idea … that we can send 5,000 service members to the border and somehow stop migrants, refugees, asylum seekers fleeing the most dangerous countries in the hemisphere — or that we could build a 2,000-mile wall at a cost of $30 billion, where we’d have to take someone’s ranch, or farm, or property through the use of eminent domain to build something that we don’t need at a time of record security and safety for border communities like mine in El Paso… It’s ridiculous. It’s again this idea that we can be governed by our fears.”

O’Rourke then added this:

“Remember the proud heritage of this defining immigrant story, state, and experience that is Texas. That’s who we are… El Paso is one of the safest cities in the United States of America — not in spite of, but because we are a city of immigrants.”

Beto got plenty of love online for his comments at the “Hardball” town hall:

I don’t know if @BetoORourke will win or not, but the fact that there are still politicians like him gives me hope for this country.

True leadership for a country in desperate need of his voice! Thank you Beto ORourke for an unwavering belief in the American story through the eyes of our history and heritage of immigrant families coming and making us a better country for being here. No fear. Vote!

Yes!!! Beto is the real deal. He makes me believe in politicians again. I feel like I’m listening to a caring and genuine person. This is so refreshing, inspirational, and hopeful!

Beto O’Rourke is offering hope and compassion, two qualities that are desperately needed to counter the hate and fear that spews from Trump’s mouth and Twitter feed.