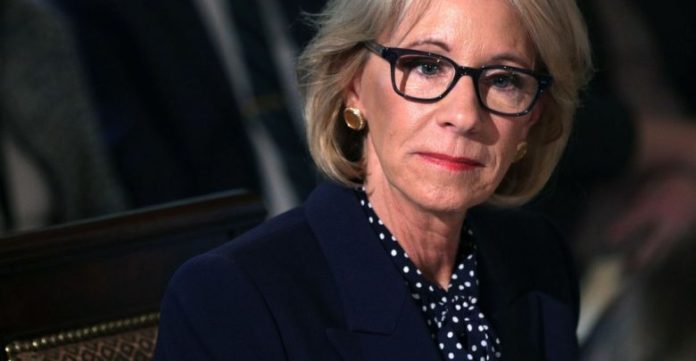 On Tuesday, Education Secretary Betsy DeVos appeared before a House committee and tried to defend the massive cuts to 29 programs the department oversees which DeVos argued would save at least $7 billion annually, telling skeptical lawmakers:

“We had to make some difficult decisions.”

Those deep cuts would impact at least 272,000 students, according to Rep. Mark Pocan (D-WI).

But the proposed cut in the Education Department’s budget that has drawn the most outrage is the one that would eliminate funding for the Special Olympics, a program which DeVos pretended to personally support:

“I think Special Olympics is an awesome organization, one that is well supported by the philanthropic sector as well.”

So awesome that she wants to eliminate federal funds for the program.

In @BetsyDeVosED’s budget, there are major cuts to programs like the Special Olympics. Sec. DeVos didn’t know the number of kids who would be hurt by that cut, so I made sure she now knows that 272,000 kids are seeing their support taken away. pic.twitter.com/6ZiOfDU4Ou

The good news is that DeVos and the Trump administration won’t be able to enact their massive cuts to education programs because Democrats control the House and will never pass the White House’s 2020 budget in its current form.

It was great to spend time with the @SpecialOlympics athletes! Thanks for all you do, @TimShriver. https://t.co/tCrpx40xaN

And this week that posting from DeVos drew some harsh new responses:

did you decide to strip all the funding and dignity from these athletes before or after you used them as literal props?

You are truly an evil human being.

The blithe cruelty in this hypocrisy is absolutely astounding.

You are a horrible person, and you should feel bad for targeting disabled programs for budget cuts. These kids need MORE supports, not less.

You dare call yourself a Christian. Matthew 25:40 should be tattooed across your forehead so you see it every time you look in a mirror