The United States Blues
Home Education Betsy DeVos screws over students in debt after being defrauded by their... 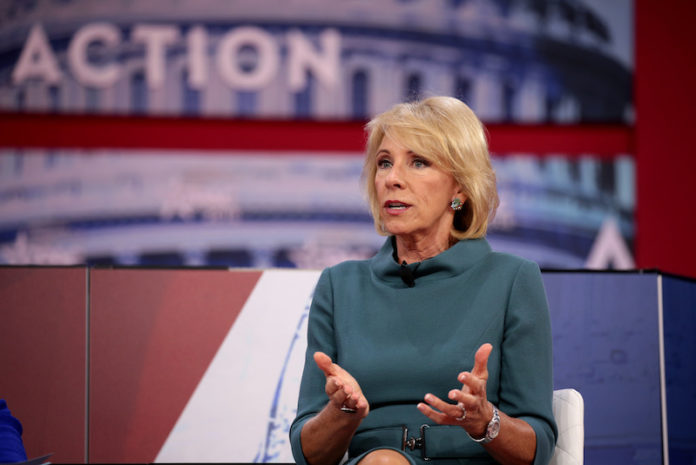 Secretary of Education Betsy DeVos has enacted new rules that would have been beneficial to President Donald Trump’s for-profit university scam.

Back in 2016, the Obama administration completed a set of rules designed to help students gain debt relief if they believe they were defrauded by their school. The rules prevented for-profit colleges such as Trump University and others from using predatory practices to lure prospective students into a financial trap that would leave them indebted and without a real degree.

They were good strong rules, but now under DeVos, the Education Department has scrapped those rules and has replaced them with rules friendly to for-profit colleges.

The new rules apply to federal student loans made from July 2020 onward. They will replace a set of policies, completed by the Obama administration in 2016, that Ms. DeVos had delayed carrying out until a court ordered her to do so last year.

Under the new rules, borrowers seeking loan forgiveness will have much higher hurdles to clear. They will need to prove that their college made a deceptive statement “with knowledge of its false, misleading, or deceptive nature or with reckless disregard for the truth,” and that they relied on the claim in deciding to enroll or stay at the school. They will also need to show that the deception harmed them financially.

There is currently no time limit on submitting claims, but Ms. DeVos set a three-year deadline from the date that students graduate or leave their school.

Needless to say, education advocates and consumer watchdogs are condemning the rules and DeVos.

“She’s shredding a set of fair, common-sense rules that level the playing field between students and those who take advantage of them.” Project on Predatory Student Lending legal director Eileen Connor said.

Indeed, the same predatory practices used in the past can now resume under the Trump administration. And DeVos, an advocate for privately run education, is certainly not going to do anything to stop it from doing so.

“On the Friday of Labor Day weekend, Betsy DeVos is gleefully forcing hundreds of thousands of students defrauded by for-profit colleges to suffer yet another indignity,” American Federation of Teachers president Randi Weingarten said. “Shame on her.”

“The rule takes a scythe to defrauded borrowers,” he continued. “For many affected students, disproportionately veterans, first-generation college-goers, and people of color, it’s a double whammy—not only are their finances and careers wrecked by worthless degrees, any chance at justice is then callously denied to them by the secretary. Betsy DeVos has again shown just how determined she is to hurt students while helping her friends who run failing for-profit colleges.”

Of course, policies like these are the precise reason why Americans are increasingly supporting universal education for all, which, like universal healthcare, would be paid for through taxes by the government. Such a system would eliminate student loan debt and end predatory practices that hurt students who just want a better education so they can get good jobs.

But as long as Trump and DeVos are in charge, it’s never going to happen and Americans will keep getting screwed.