The United States Blues
Home News Biden Says He Would Have ‘Beat The Hell’ Out Of Trump In... 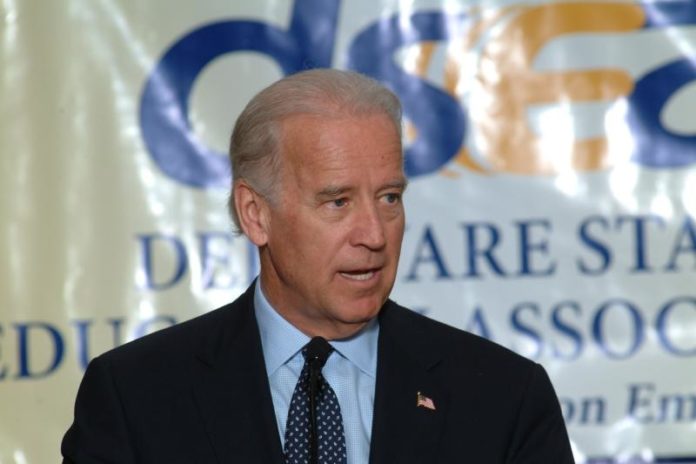 President Donald Trump is lucky he didn’t go to the same high school as former Vice-President Joe Biden because he would have gotten a well-deserved ass-kicking for bragging about grabbing women’s genitals without their consent.

“A guy who ended up becoming our national leader said, ‘I can grab a woman anywhere and she likes it.'”

Biden said that during the “It’s On Us” event at the University of Miami on Tuesday to raise awareness to end violence against women and rampant rape culture on college campuses across the country.

Coming down the stretch of the 2016 race, an Access Hollywood tape surfaced with audio of Trump bragging about sexually assaulting women.

“But I couldn’t get there. And she was married. Then all of a sudden I see her, she’s now got the big phony tits and everything. She’s totally changed her look…You know I’m automatically attracted to beautiful—I just start kissing them. It’s like a magnet. Just kiss. I don’t even wait. And when you’re a star, they let you do it. You can do anything. Grab ’em by the pussy. You can do anything.”

Biden told the audience that if Trump had gone to his high school and made such disrespectful remarks about women, he would have “beat the hell out of him.”

“They asked me would I like to debate this gentleman, and I said no. I said, ‘If we were in high school, I’d take him behind the gym and beat the hell out of him.'”

Trump and his defenders tried to shrug it off as mere “locker room talk,” but Biden didn’t buy the excuse.

“I’ve been in a lot of locker rooms my whole life. I’m a pretty damn good athlete. Any guy that talked that way was usually the fattest, ugliest S.O.B. in the room.”

“Sexual assault is about power and the abuse of power more than it is about sex,” he said. “It’s not just on the men. It’s on you women, as well, on campus. All the studies show that 95 percent of young women who are abused — the first person they tell is their roommate, their friend, someone on campus.

You’ve got to inform yourself as to what facilities are available, what help is available, not just empathize, hug and say, ‘I’m so sorry.’ You have an obligation to be informed.”

Here’s the full video of Biden’s remarks via Facebook.

Back in 2016 during a rally for former Secretary of State Hillary Clinton, Biden wished he was back in high school and that Trump had been a classmate. Biden said:

“The press always ask me, ‘Don’t I wish I were debating him?’ No, I wish we were in high school — I could take him behind the gym. That’s what I wish.”

Biden has spent his career fighting for women. He sponsored the Violence Against Women Act in 1994 and has continued to be a prominent voice for women’s rights, most recently supporting the #MeToo movement and calling for federal sexual assault legislation.

If Congress passed the legislation, women would have the ability to sue their abusers in court, something that only some states allow them to do.

It’s all the more reason why America would be better off with Biden as president than Trump.

And we may get the chance to make that happen in 2020 if Biden decides to throw his hat in the ring.