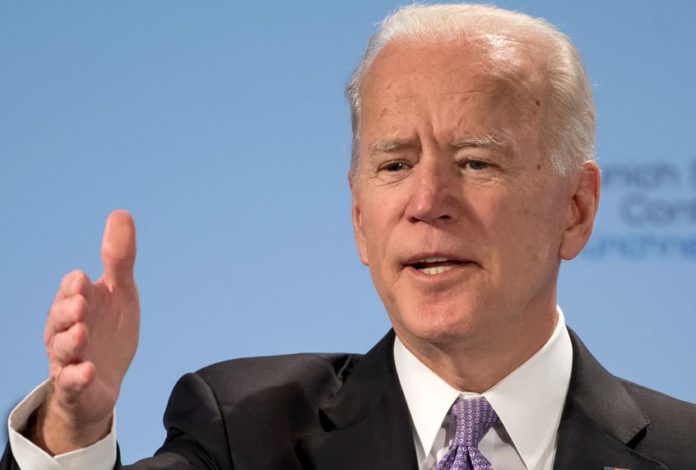 “Discussions among his core group of advisers about the exact timing of his announcement and subsequent campaign events are ongoing and subject to change, multiple officials said. Those discussions were set into motion earlier this month, as Biden himself publicly acknowledged a decision was all but a formality.”

“‘My intention from the beginning was if I were to run would be the last person to announce,” he said after delivering the second of three speeches since mid-March to union audiences. ‘We’ll find out whether I can win in a primary.'”

On Thursday in Boston, Biden spoke at a union rally, Biden said it was time to “take back” the country, adding:

“I’m getting so sick and tired of the way everybody’s being treated. We will take back this country. … I mean it. Don’t give up. Keep it going.”

Politico reports that Biden hit many of the traditional Democratic talking points as he spoke to striking workers in Massachusetts:

“He laid out a vision for ‘decent health care,’ a ‘fair wage’ and retirement during his 10-minute speech in the rain. The appearance was Biden’s latest trip to fire up pro-union Democrats. Last month, he spoke to a firefighters legislative conference in Washington and hinted at his presidential plans.

“‘Workers are not being treated across the board with dignity. They’re not being treated like they matter,’ Biden told a crowd of hundreds on Thursday. Several people held ‘Run Joe Run’ signs and yelled ‘Mr. President’ at Biden when he pulled up to the rally in an S.U.V.”

Biden also appealed to some of the same voters who cast their lot with Donald Trump in 2016: Blue collar, working class Americans:

“People are busting their necks. People go out and make a living, people who play by the rules, people who have done everything they’re supposed to do. And people are entitled to be treated with respect and decency and fairness.”

According to a Morning Consult poll released this week, Biden still leads all Democratic candidates for the 2020 nomination with 31 percent of those surveyed favoring him, compared to 23 percent for 2016 runner-up Bernie Sanders. California Senator Kamala Harris came in third with 9 percent.