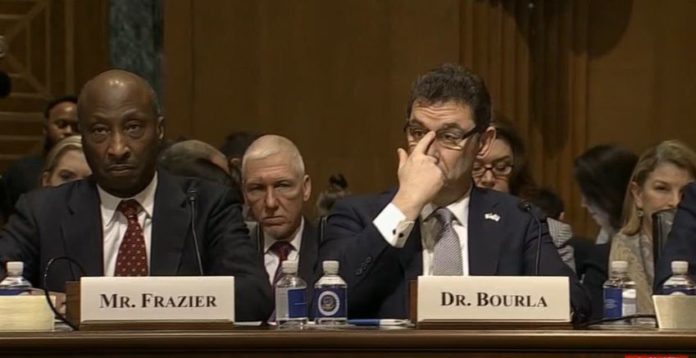 A group of Big Pharma executives embarrassed themselves in front of Congress on Tuesday as they basically admitted that they hate low drug prices and tried to make every excuse in the book to justify the price-gouging tactics that are bankrupting Americans or killing them.

The United States’ privatized healthcare system also includes pharmaceutical companies, which have been jacking up the price of life-saving drugs in recent years out of sheer greed, fleecing the public who have to choose between saving money or saving their lives.

It’s become such a nightmare that more and more Americans than ever before are crying out in support of socialized medicine, also known as universal healthcare regulated by the government to prevent corrupt businessmen from controlling what should be a human right that anyone can afford.

Diabetics are so desperate they are traveling to Mexico to purchase their insulin because it is much cheaper. One diabetic told MSNBC that he purchased a year’s supply of insulin for $104 compared to the $1,400 he would have spent in America.

But Big Pharma executives don’t care as long as they are getting rich, and enough outrage has been generated that Congress is trying to hold them accountable.

During the hearing on Tuesday, Senator Ron Wyden (D-Ore.) accused pharmaceutical executives of “stonewalling” on the issue during a Congressional hearing on Tuesday and asked how these outrageously high prices are not “gouging” the American public as they provide lower cost drugs to nations where socialized medicine is the norm.

One exec argued that drug prices vary around the world and that the U.S. has the highest prices, claiming that research and development (R&D) is somehow causing such prices.

Wyden called him out, noting that R&D makes up a fraction of revenue spent by Big Pharma.

Another exec actually tried to justify higher prices because they supposedly did not get much of a tax break in President Donald Trump’s tax law.

The executives also blamed Medicare for higher prices as they desperately tried to absolve themselves and their greed from any responsibility for skyrocketing prices of prescription medication that had been affordable for decades.

It should be pointed out that Medicare actually covers prescription drugs at lower costs than private insurance and individual pay.

Here’s the report via MSNBC:

And here’s a video posted by Wyden on Twitter.

The United States pays many times more for drugs than Germany or France, even though drug makers still turn a profit in those countries. If that’s not price gouging I don’t know what is. pic.twitter.com/3HlFJqTulA

Clearly, Americans are “getting hosed” by Big Pharma as Wyden says as other Western democracies enjoy lower costs on healthcare and drugs because their healthcare and pharmaceuticals are well-regulated to prevent price gouging. That’s because these countries don’t have a greedy private healthcare system as we do.

An American recently had to go to the emergency room at a hospital there. He had no insurance and was not covered by the national insurance system Taiwan uses. But for that ER visit, which can cost thousands of dollars here, he only had to pay $80 total. That included the ER visit, being seen by a doctor, undergoing several tests, getting an IV and a diagnosis along with the prescription he needed to get better. The whole ordeal cost him only $80. Many Americans have the same experience in other nations, including Canada and the United Kingdom, which both have universal healthcare systems.

We are the only developed nation in the world that does not have socialized medicine and that’s because conservatives have been demonizing socialized medicine for decades in an effort to prop up greedy corporate executive who want to hold Americans hostage to get more money in exchange for getting the healthcare they need.

These executive want us to blame anyone and anything else but them for the high prices, but the evidence is clear. We need universal healthcare in this country and we need it now. It’s time for Big Pharma and private healthcare to be brought to heel. They will whine and issue apocalyptic warnings about how the whole system will collapse, but the reality is that the private system and their vast wealth will collapse, and that’s a good thing for anyone who wants to get the medical care and prescription drugs they need without having to worry about going bankrupt to get it.