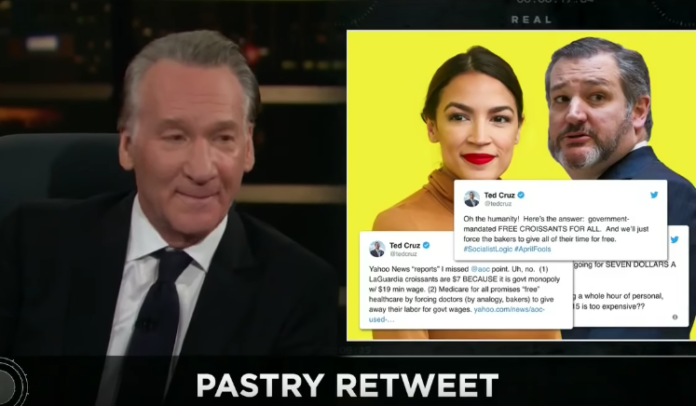 Senator Ted Cruz (R-Texas) got “New Ruled” by HBO host Bill Maher on Friday night for attacking Rep. Alexandria Ocasio-Cortez (D-N.Y.) over her tweet about high food prices and low wages for the workers who prepare it.

Earlier this week, AOC made a point when she noted that the price of food is going up but worker wages, which are still too low, is what Republicans are complaining about.

Cruz responded by missing the point of her tweet entirely, claiming that the government has a “monopoly” at the airport and tried to compare the situation to Medicare-for-All.

Oh the humanity! Here’s the answer: government-mandated FREE CROISSANTS FOR ALL. And we’ll just force the bakers to give all of their time for free. #SocialistLogic #AprilFools https://t.co/1mx00FegwS

Yahoo News “reports” I missed @aoc point. Uh, no. (1) LaGuardia croissants are $7 BECAUSE it is govt monopoly w/ $19 min wage. (2) Medicare for all promises “free” healthcare by forcing doctors (by analogy, bakers) to give away their labor for govt wages. https://t.co/OJyBVwsvxK

And so did Maher on “Real Time” Friday.

“New rule, since Alexandria Ocasio-Cortez tweeted that croissants are expensive in the airport, and Ted Cruz felt like he needed to write a series of tweets, teasing her and calling her a socialist, Ted Cruz has to admit he would kill his whole family for five minutes with her shoes,” he quipped.

Republicans are obsessed with AOC to the point where they regularly attack her and they always embarrass themselves in the process because Ocasio-Cortez is not afraid to call them out on social media.

Seriously, they will never learn.