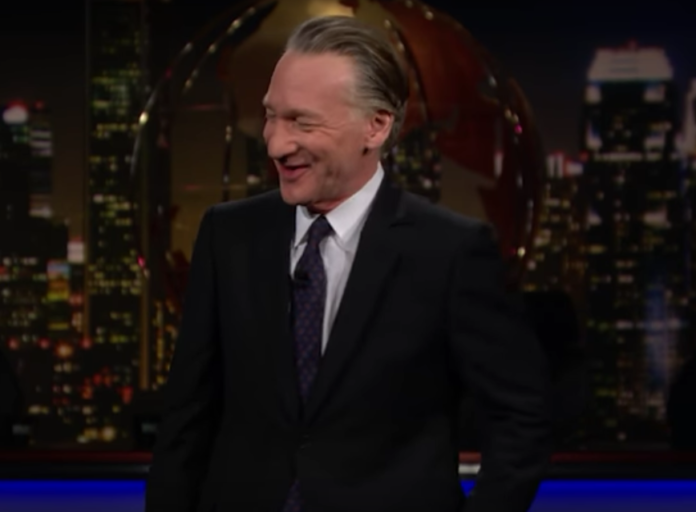 “So much crazy sh*t happened” this week,” Maher began, that he went through it “chronologically.”

The HBO host started with the sudden resignation of White House Communications Director Hope Hicks, whom Maher pointed out ironically was hardly heard from despite her job title.

Hicks was the one person in the White House Trump could work with, Maher said:

“She was a former model and everything he says makes you want to throw up. It’s very ironic because he was very dependent on Hope Hicks and his whole presidency is about giving Hicks hope.”

Maher also joked about the fact that one of Hicks’ main jobs during the 2016 campaign was to steam Trump’s suits while he was wearing them:

“She feels like she can be more effective steaming the pants of creepy old men in the private sector,” Maher said, barely able to control his laughter.

“So, now the prettiest deaf-mute in the West Wing is Jared,” he continued, before explaining that Kushner recently lost his security clearance and is embroiled in a scandal because he solicited loans from banks during meetings at the White House in an effort to pay off a massive debt on a building he owns:

“It turns out that every inexplicable f*cked up thing that’s happened in the last year is really because Jared is trying to get $1.2 billion to pay for a building he shouldn’t have bought.”

“I can say this because my mother is Jewish, he’s too stupid to be a Jew,” he continued, predicting that Kushner will end up going to a special prison constructed just for him called “Unleavenworth.”

In fact, Kushner has demonstrated that he is so stupid that Maher demanded to see his birth certificate:

Maher also noted that other resignations could be on the horizon such as Homeland Security Secretary H.R. McMaster and economic adviser Gary Cohn, who are rumored to be preparing to exit the White House:

“Trump’s going to be all alone in the White House talking to a soccer ball with a face painted on it,” he said, before declaring that, “All this scandal makes it very difficult for the NRA to run the country.”

Maher really enjoyed rubbing conservatives’ faces in the fact that Trump wants to take guns early and deal with due process later:

“That’s right Republicans, it turns out there is a president who will ignore the Constitution and come for your guns. The one you f*cking idiots voted for!”