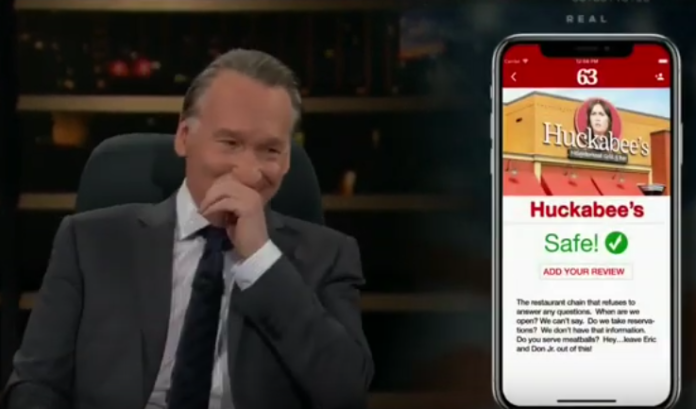 “Real Time” host Bill Maher took aim at MAGA hat wearers on Friday night after the notorious snowflakes created an app identifying “safe spaces” for themselves because they are being widely ridiculed for being racist idiots.

President Donald Trump’s supporters often wear red MAGA hats as a symbol of their hate to intimidate others. But now that most Americans will not tolerate their bullsh*t, they have found themselves in the position of being refused service at restaurants and bars and relentlessly harassed and mocked.

In response, the Trump supporters decided to create a guidebook listing “safe spaces” where they can wear their MAGA hats without ridicule.

Unfortunately for them, the guidebook only resulted in more ridicule, this time from Maher, who created a list of restaurants MAGA hat wearers will fit right in, complete with reviews.

“So you think you have problems, but we found people with problems you cannot believe,” Maher began. “It’s the people who wear ‘Make America Great Again’ hats — you know, the MAGA hats — they’re complaining that they’re receiving all kinds of prejudice when they go out to eat, in restaurants, in taverns, in airports.”

“Wherever they go, people see the ‘Make America Great Again’ hat and they judge them as some sort of knuckle-draggers — I don’t know where they’re getting this,” he continued.

“So — I’m not making this up — they came up with a kind of guidebook online, kind of a Green Book, for where you can go if you’re a MAGA hat wearer where you’ll be welcomed by people who think like you,” he said.

Maher then began reading hilarious reviews of places such as “Very White Castle.”

“This greasy hamburger joint is perfect for infuriating the left. They serve only GMO’s, and so non-organic, it’s barely food. Extra-wide booths accommodate extra-wide customers at this MAGA-friendly spot that insists the link between cholesterol and heart disease is ‘fake news.’”

The next “restaurant” he profiled is “Huckabee’s.”

“The restaurant chain that refuses to answer any questions. When are we open? We can’t say. Do we take reservations? We don’t have that information. Do you serve meatballs? Hey…leave Eric and Don, Jr. out of this!”

But the most devastating review was for “Goldy’s Splash House.”

“Located just off Avenue P, Goldy’s Splash House is staffed with high-end Russian hookers who always ‘aim’ to please. It doesn’t take a whiz to figure out why so many consider this Flushing-based watering hole ‘number one.’”

That’s going to particularly sting since Trump allegedly likes being urinated on by Russian prostitutes.

MAGA hat wearers are merely receiving a taste of what minorities go through all the time in America. But now that the shoe is on the other foot, they are whining about it instead of learning that racism and hate are wrong and they should not support it. By wearing that red hat, Trump supporters might as scream at the top of their lungs that they are racist sexist bigots and they deserve all the ridicule in the world for it. Because at least they can take the hat off. Nobody can take off their skin.