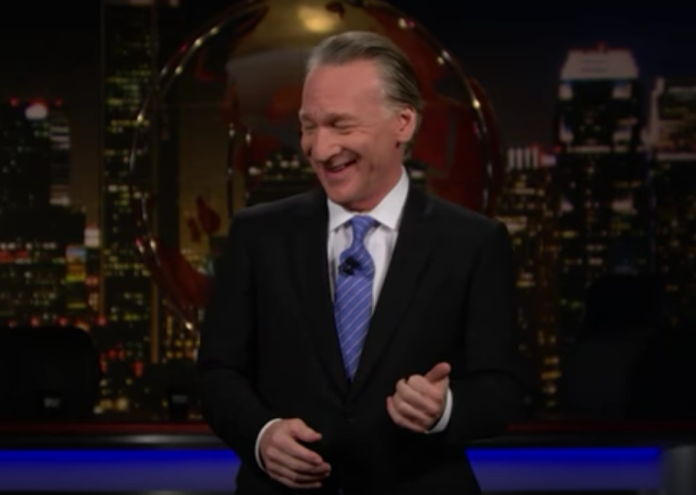 On Friday night, Real Time host Bill Maher hilariously recapped what has been another bad week for President Donald Trump.

“He has experience with incompetence,” Maher quipped on Bolton, adding that Bolton is a war hawk “who never served in Vietnam.”

Indeed, Maher is correct. Rather than be drafted to serve in Vietnam, Bolton has openly admitted that he joined the National Guard to avoid fighting in the war. Bolton said:

“I confess I had no desire to die in a Southeast Asian rice paddy. I considered the war in Vietnam already lost.”

So, Trump and Bolton have cowardice in common.

Maher then turned to the Facebook scandal involving Cambridge Analytica, a firm that worked on Trump’s 2016 campaign. Maher pointed out that:

And then Maher mocked conservatives with:

“…This week’s episode of restoring honor and dignity.”

On the docket this week was Trump’s continuing Stormy Daniels scandal, being sued by both Daniels and Playboy Playmate Karen McDougal, who also had an affair with Trump, and the revelation that Donald Trump Jr. had an affair with a contestant on The Apprentice and is getting a divorce.

“This must be the breakdown of the family that conservatives warned us about if we allowed gay marriage. I think this is what they meant.”

He explained that Trump Jr’s wife Vanessa discovered the affair by looking at her husband’s phone while he was in the shower. Maher jokingly claimed the text read:

“We can’t keep meeting like this. … Turns out that was from the Russians.”

You know, because Trump Jr. took a meeting with Russians in June 2016 to discuss getting “dirt on former Secretary of State Hillary Clinton.”

Then Maher turned to Trump’s affair with McDougal, who said sex with Trump was “always the same.”

“There was a pointed moment in the interview where she said she was sorry for what she did to the other woman in the equation. But Ivanka said she was okay.”

In the end, he touted Stormy Daniels’ interview on 60 Minutes this Sunday, but broke the news to his audience that she would not be discussing what sex was like with Trump because she’ll be doing that in an interview with “60 Seconds.”