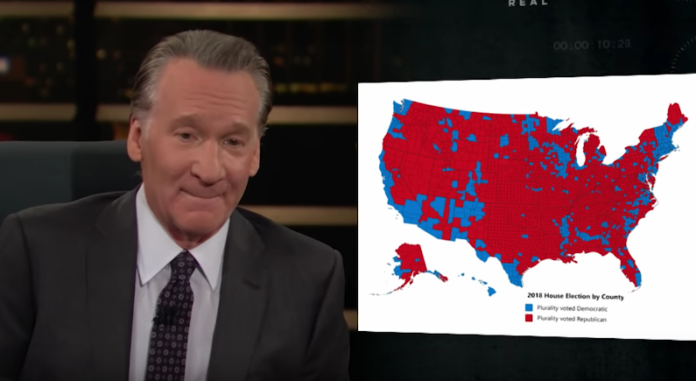 “Real Time” host Bill Maher did a number on red states Friday night during his New Rules segment explaining why conservatives are so desperate to “own the libs.”

Maher began by noting that Amazon canceled a new headquarters in New York because taxpayers were not thrilled about giving the $1 trillion company what amounts the a “$3 billion bribe” to set up shop there. But the comedian went on to explain that Amazon could take this opportunity to do some real good by setting up operations in places that desperately need innovation and development, such as the Midwest and South.

“We have problem in America called spatial geographic inequality, which means that the most affluent and educated people are clustered in just a few cities,” he said before pointing out that Hillary Clinton once boasted about winning in places that represent most of America’s gross domestic product as well as places that are diverse and moving forward.

“Maybe that has something to do with why Trump voters are obsessed with ‘owning the libs,’ because the libs own everything else,” he suggested.

“The blue parts of America are having a big prosperity party, while that big sea of red feels like their invitation got lost in the mail — and they still use the mail,” he quipped while showing a 2016 Election map.

“They turn on the TV and all the shows take place in a few hip cities. There’s no “The Real Housewives of Toledo” or “CSI: Lubbock,” he said.

“There are no red carpets in Wyoming and no one ever asks you ‘Who are you wearing?'” he continued. “Because the answer is always Target.”

“There are two Americas,” Maher concluded. “And it seems like one is where all the cool jobs are. We have operas, theater districts and world-class shopping. We have chef Wolfgang Puck, they have Chef Boyardee. Our roofs have solar panels, theirs have last year’s Christmas lights. We’ve got legal bud, they’ve got Bud. The flyover states have become the passed over states. That’s why red state voters are so pissed off.”

Maher suggested that Amazon move into a city that needs to be revitalized so that economic development will spark social change that improves lives.

And if any states desperately need change, it’s red states because they experience more poverty than blue states and take more federal dollars but seem to get nowhere with the extra funds. Red states also have lower wages and worse healthcare. Red states have also trickle-downed themselves into the ground while blue states like California enjoy massive budget surpluses.

So, Maher does miss one point. It’s not just that red states need companies like Amazon to start changing things, they need to change their political environment as well. Republicans have torn these states down so much that they’ve become the laughingstock of the nation. Change can’t just be expected because corporations move in, voters must change who they vote for at election time so that their state can turn into a more attractive place for business to thrive. Economic ruin and lower life expectancy aren’t exactly selling points. Red states need to give companies a reason to move in and do business, but Republicans are not doing that. Democrats have proven time and time again that they know how to build a strong economy. Red states need to give Democrats a chance, and then companies will start giving red states a chance.