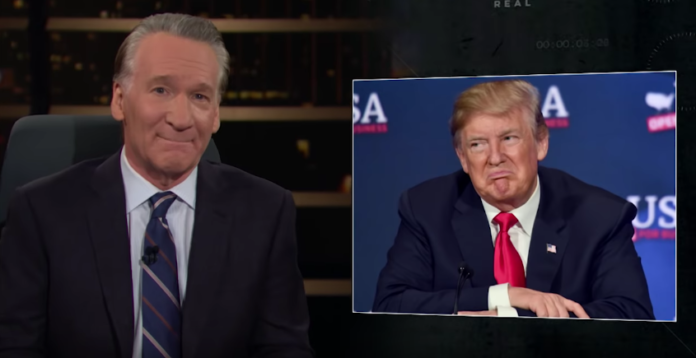 HBO host Bill Maher took aim at evangelicals on Friday night for claiming that President Donald Trump was chosen by God in 2016.

At CPAC, which Maher referred to as “a virtual Woodstock of the mentally impaired,” many speakers declared that Trump is “God’s will,” especially My Pillow CEO Mike Lindell, who has spent a lot of his time sucking up to Trump.

“Mike’s pillows are made from foam, but his head is filled with feathers,” Maher said. “But Mike’s belief there is not unique, a significant portion of our population believes that in 2016, God put Trump in office. And I was giving all the credit to Putin.”

Indeed, Trump’s evangelical base is as supportive of him as ever, even going so far as to get him to sign their Bibles in Alabama.

In an effort to justify their belief, evangelicals have taken to comparing Trump to King Cyrus, who unwittingly saved the Jews when he sacked Babylon during his reign as king of Persia.

“Why Cyrus? Because Evangelicals had to solve this little problem they have, which is that they want to support a Republican president, but this particular happens to be the least-Christian one ever,” Maher said. “A man who loves flesh-peddling, coveting, cursing, cheating, bullying, bragging, sloth, adultery and ripping off charities. And who lies more frequently than the rest of us pee.”

“The type of man who would go into a confessional booth — and never come out,” he continued. “So how to square that circle? Just say Trump is like King Cyrus.”

Except that there’s no comparison here, which Maher explained.

“Trump isn’t a vessel for God’s will, he’s a vessel for fried chicken,” he quipped. “Cyrus wasn’t a fat orange c*nt. Cyrus wasn’t a sinner. He wasn’t a pathological liar. He didn’t call scribes the ‘enemy of the people.’ He never paid a concubine hush money.”

Maher concluded by pointing out that this blasphemy is proof that conservatives will use the Bible to justify anything.