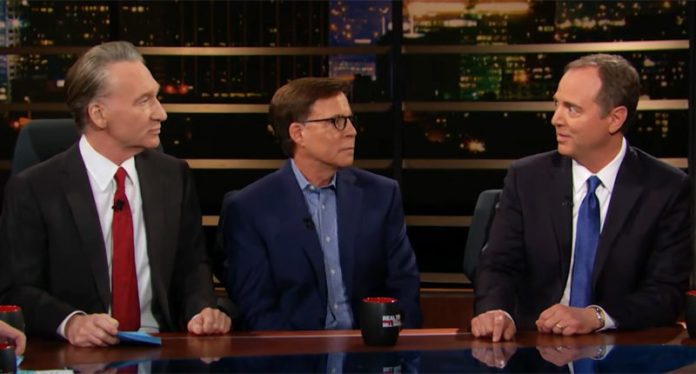 Friday evening on the HBO show “Real Time With Bill Maher,” a panel that included Rep. Adam Schiff (D-CA) gave Attorney General William Barr hell for his willingness to serve as a protector for President Donald Trump and his many lawless actions since he took office.

“Look, it is crystal clear that he [Barr] misled the people of America intentionally by putting forward the most positive spin on the report.”

That led Schiff to note that he cannot understand why so many people are willing to ruin their reputations for the sake of protecting Trump:

“Why did Barr want the job? I marvel at so many people who are so willing to debase themselves for a seat at Donald Trump’s table.”

In an earlier discussion, Schiff also told Maher that whether Trump is impeached or not, Americans can render a verdict on his behavior and crimes when they go to the polls in 2020:

“At the end of the day … there’s only one way to deal with this problem, whether we impeach him or not, and that is to vote his ass out of office.”

The most stinging rebuke to a man as self-absorbed and vain as Donald Trump would indeed be for him to lose his bid for re-election, and recent polling suggests he’s facing an uphill battle, especially in key battleground states such as Michigan, Ohio, Pennsylvania, and Wisconsin. Those states were the difference that put Trump over the top in the electoral vote three years ago.

Impeachment could actually make Trump stronger and more powerful right before the 2020 election. That could help him sneak out yet another victory.

As Adam Schiff noted, the best way to rid ourselves of Trump is to use the ballot box as our own personal form of impeachment.