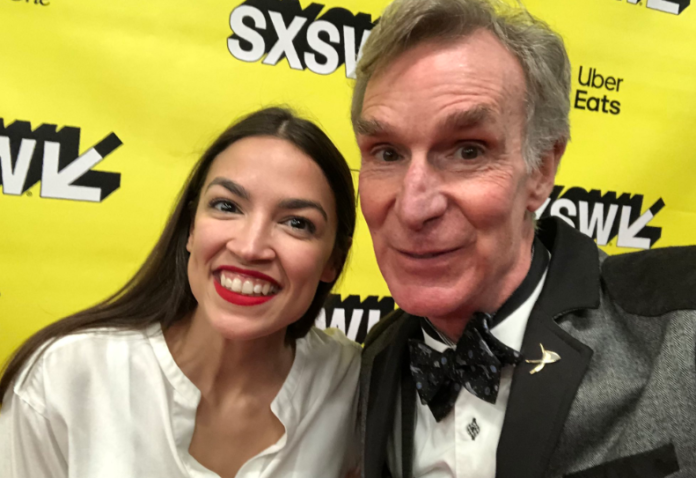 Bill Nye the Science Guy is a fan of Rep. Alexandria Ocasio-Cortez (D-N.Y.), especially after she thoroughly answered his question about climate change at the SXSW conference on Saturday.

During a panel, Nye surprised the freshman congresswoman who has been making waves with her Green New Deal legislation to fight climate change, and drew a standing ovation from her before asking her a question about addresses fears conservatives have about the policy.

“As you may know, I’m a white guy,” Nye began to chuckles from the audience. “I think the problem on both sides is fear. People of my ancestry are afraid of having to pay for everything as immigrants come into this country. People who work at the diner in Alabama are afraid to try to ask for what is reasonable. So, do you have a plan to work with people in Congress that are afraid? I think that’s what’s going on with many of the conservatives, especially when it comes to climate change. People are just afraid of what will happen if we try to make these big changes.”

The “big changes” of course will transform America into a clean energy powerhouse with an economic boost that benefits everyone. The entire country would have to mobilize over ten years to make the vision a reality. That means millions of jobs are created to unleash a clean energy revolution that will change transportation with high-speed rail, electric and hybrid fuels along with solar and wind power to help America transition away from coal, oil and nuclear power. The deal also includes providing a living wage, education and an infrastructure overhaul to help people live better lives.

A majority of Americans support the Green New Deal.

Ocasio-Cortez addressed Nye’s question by observing that we must end the notion that people gaining something means that others lose something.

“We can give without a take,” she continued. “We are increasing our capacity for productivity. We’re viewing progress as a cost instead of as an investment. When we choose to invest in our system, we are choosing to create wealth.”

She then stressed the importance of voters pressuring their representatives in Congress to act because even though we all know lawmakers are opposing the legislation because they are paid to do so by the fossil fuel industry, they openly blame their constituents as their reason to not vote for it. People need to change that by calling their lawmakers as often as they call a restaurant for take-out food.

But it also takes courage to stand up for change, which Ocasio-Cortez pointed out is easier when more people are standing with you.

“The first person who stands up has to encounter the most amount of fear and discomfort, but once that one person stands up, it becomes immensely easier for the second person and the third,” she said.

.@AOC answers @BillNye’s questions about climate change and how to counteract fear at #SXSW #tictocnews pic.twitter.com/JKL9l2xulo

AOC gets it. She sees that fear is dividing us. We can address income inequality. We can address climate change, if we get together and get to work. #SXSW @AOC pic.twitter.com/I8tSbAc97u

Nye endorses Ocasio-Cortez’s fight against climate change and so should the rest of us. The Green New Deal represents a better future for everyone and for our country as a whole. We can’t afford to let this opportunity slip through our fingers because a bunch of lawmakers are too scared of their polluter donors. It’s time to make them more scared of the voters.