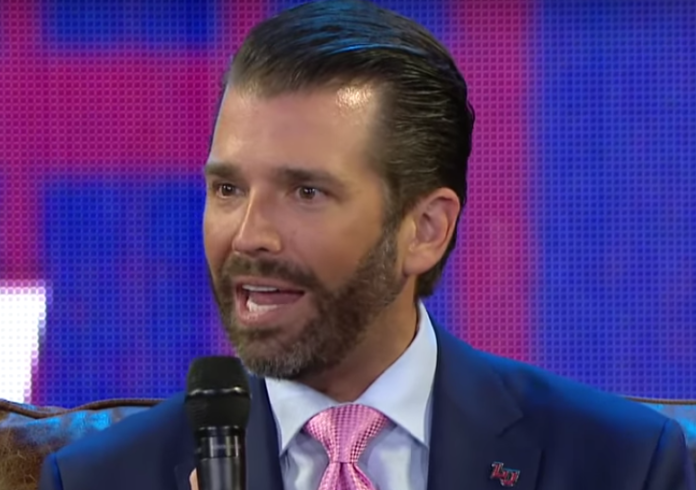 Senator Kamala Harris (D-Calif.) has emerged as a major threat to President Donald Trump after her winning performance on the second day of the first Democratic debate on Thursday night, which is why Donald Trump Jr. is apparently now questioning if she is really black or not.

Just minutes after a Russian bot account questioned Harris’ heritage, Trump Jr. was quick to retweet it, only to remove it later. But not before he got caught and screenshots were taken. 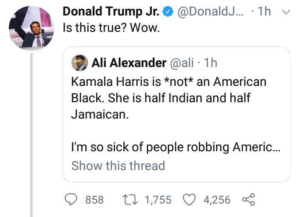 She, by far, had the best showing of the night and is now in a much stronger position in the primary. Harris could easily be the Democratic 2020 nominee if her star continues to rise, which is bad news for Trump since Harris has made it clear she intends to make him pay for his crimes.

Trump Jr. and other right-wingers apparently fear her as well, which is why they are trying to create a rift between her and black voters by saying she’s not really one of them.

The screenshot of the deleted tweet of Trump Jr (the pathetic son whose father ghosted him and hopes to one day be a lap dog to Putin’s lap dog) questioning whether Kamala Harris is black – for those of you asking for it since the media isn’t reporting on it pic.twitter.com/w6m2ADlUSy

And Donald Trump Jr. just grabbed the tiki torch from his father in Birtherism 2.0

They are scared, justifiably, of Kamala Harris. pic.twitter.com/HOB8MFgOTd

It don’t take a genius to figure out that Kamala Harris was the sharpest one up there… Trump Jr. wouldn’t be tweeting about her if she wasn’t…

Not surprising that Donnie Jr. is afraid of @KamalaHarris. She would destroy Low T @realDonaldTrump in a debate.

Even former Trump campaign member Katrina Pierson repeated the attack while adding that former President Obama is an African-American.

And meanwhile, the president’s racist son is retweeting this poisonous garbage. pic.twitter.com/bpFj9lgBYM

So, now Trump and his team believe Obama is an African-American after all that time they spent calling him a foreigner.

You just can’t make this stuff up.