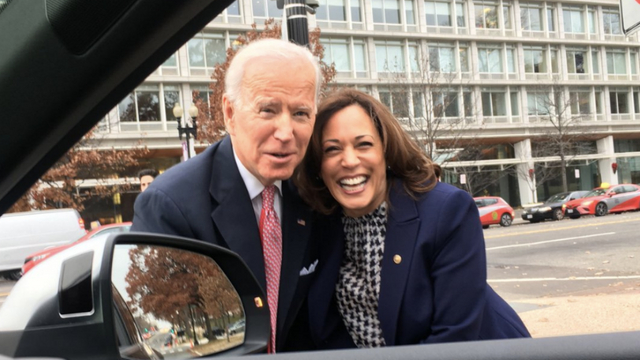 Members of the Congressional Black Caucus have a message for current Democratic front-runner Joe Biden: If you win the nomination, your best bet for a running mate is Senator Kamala Harris (D-CA), who is also seeking to be the 2020 nominee.

According to Politico, some members of the CBC are torn over whether to support Biden, Harris, or Senator Cory Booker (D-NJ), but they think Biden could excite African-American voters by choosing Harris:

With the former vice president jumping out to a huge, if early, lead in the polls, several CBC membersare warming to the idea of a Biden-Harris ticket to take on President Donald Trump.

Democrats are indeed hoping to increase turnout among blacks, and believe the lack of enthusiasm for Hillary Clinton may have kept many of them from casting a ballot in 2016. Harris could provide the spark needed if Biden does indeed emerge as the Democratic nominee.

“Either combination there, I’d love,” said Rep. Anthony Brown (D-MD). “I think he’s going to look to balance his ticket so that the ticket itself is more appealing. … I think it would make sense and it wouldn’t surprise me if he picked a woman of color.”

Another positive if Harris is chosen: If she and Biden were to defeat Trump next November, her Senate seat is in a heavily Democratic state, so whoever replaces her would also likely be a progressive. That means Democrats wouldn’t lose any ground in their attempt to retake the Senate in 2020.

Biden, having been VP for Barack Obama, also has deep ties to the black community, and is a favorite among many in the Congressional Black Caucus:

“But for the fact that we have two of our own who are both quite capable of being president, I’d say probably a lot of the members would’ve already announced for Biden,” said Rep. Emanuel Cleaver (D-MO.).

Were Biden to prevail in the fight for the nomination, Harris would be many members’ preferred vice presidential pick.

“If [Biden] becomes the nominee, that certainly would be my choice,” said Rep. Marcia Fudge (D-OH), a senior member of the caucus. “Right now, I’m still believing that Harris can be the top of the ticket.”

Biden-Harris could indeed be exactly what the Democratic Party needs in 2020, and it may well wind up happening. If so, it’ll be interesting to see how Trump reacts to two political figures he already seems to fear.