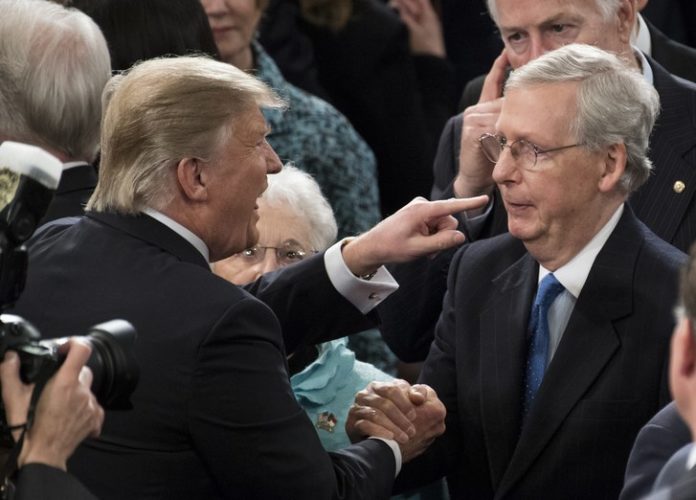 President Donald Trump’s new budget is just the latest act by the White House that cripples the Republican Party ahead of the 2020 election, Bloomberg warned on Thursday.

The budget severely slashes Medicare and Social Security to prop up Trump’s massive tax cuts for the wealthy that have caused the deficit to skyrocket, while asking for billions of dollars for a border wall along with money for his daughter Ivanka’s pet projects.

The budget not only represents a broken promise by Trump, who repeatedly vowed not to cut social safety net programs that most Americans overwhelmingly support, it threatens to sink the GOP in 2020 after just suffering a major loss in 2018 to Democrats.

Bloomberg analyzed the budget proposal and the consequences Republicans face because of it.

The budget’s hallmark huge growth forecast, billions in border-wall funding, and deep cuts to entitlement spending are meant to play as muscular displays of commitment to two issues—border security and deficit reduction—that he’s failed to deliver on, while masking the cost of one he has, his tax cut.

But the math required to balance Trump’s budget and offset the revenue-draining effects of his tax cut entails spending $845 billion less on Medicare and another $25 billion less on Social Security over the next decade, things he vowed never to do while he was running for president. “Save Medicare, Medicaid, and Social Security without cuts,” Trump said in 2015. “Have to do it.” Trump’s promise to protect these programs was popular and set him apart from the other Republican contenders.

The publication then pointed out that a Democratic poll reveals overwhelming opposition to the budget cuts, and then confirmed it with an internal GOP study.

That study, conducted in September for the Republican National Committee, found that Americans worried the tax law would prompt cuts in Social Security and Medicare, leading “most voters [to] believe that the GOP wants to cut back on these programs in order to provide tax breaks for corporations and the wealthy.”

So firmly had this fear taken root that the Republican pollsters who conducted the survey threw up their hands and concluded in a private memo to the RNC, “We’ve lost the messaging battle on the issue.”

“Whatever its effect on maintaining the allegiance of his base, Trump’s budget sends a crystal-clear message to voters who worried his tax cut would prompt cuts to Medicare and Social Security—that their fears were well-founded,” Bloomberg concluded. “Those cuts may never pass into law. But the mere suspicion that Trump harbored these views was a political disaster for Republicans last fall. Having now committed them to print in his budget, the result isn’t likely to improve.”

At this point, Republicans must be panicking about this budget proposal even though it has no chance of passing. It reveals the GOP agenda for all to see, which Democrats can use to bash them and Trump with throughout the next election season, this time with the presidency and the Senate at stake.