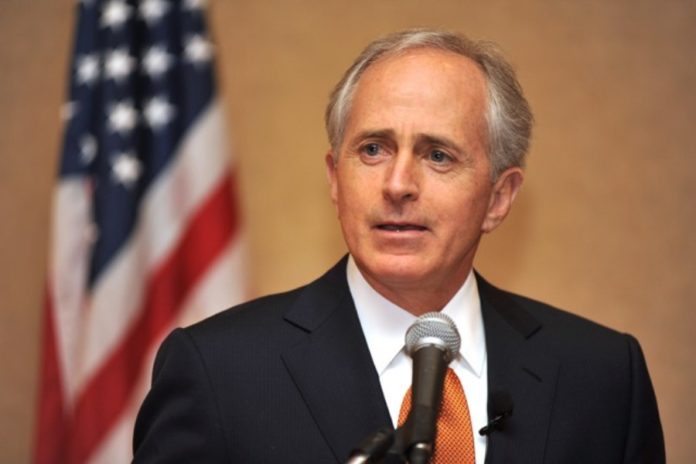 As Corker prepares to retire from the Senate in 2019, he appeared on CNN with Jake Tapper on Sunday morning to criticize the government shutdown and Trump’s behavior.

“This is a made-up fight so the president can look like he’s fighting, but even if he wins, our borders are going to be insecure,” he said. “It’s juvenile. The whole thing is juvenile.”

Corker would go on to speak fondly of his time in the Senate later in the day, saying that he is proud to have served Tennessee and that he is happy he kept his promise to step down after serving two terms.

Rather than let Corker have his moment, Trump chimed in on Twitter by claiming credit for Corker’s exit and took some final shots at him:

Senator Bob Corker just stated that, “I’m so priveledged to serve in the Senate for twelve years, and that’s what I told the people of our state that’s what I’d do, serve for two terms.” But that is Not True – wanted to run but poll numbers TANKED when I wouldn’t endorse him…..

…..Bob Corker was responsible for giving us the horrible Iran Nuclear Deal, which I ended, yet he badmouths me for wanting to bring our young people safely back home. Bob wanted to run and asked for my endorsement. I said NO and the game was over. #MAGA I LOVE TENNESSEE!

For some reason, Trump thinks everything has to be about him. He won’t even let someone retire without claiming credit for it. Just because a poll was not in Corker’s favor doesn’t mean he retired because of it. And Trump endorsed plenty of candidates who lost big in November, so Corker didn’t want Trump’s endorsement anyway.

Furthermore, Trump did not “end” the Iran deal. He only withdrew the United States from it. The deal lives on as our allies continue to support it and Iran continues abiding by it.

Yes, just like Mexico is paying for the wall… #AlertTheDaycareStaff https://t.co/4LwrkrSFFr

That’s quite a burn considering Trump supporters somehow still believe Mexico is paying the wall even Trump is trying to force American taxpayers to foot the bill.

Corker first compared the White House to a daycare center last year after Trump claimed Corker “begged” for his endorsement.

But Trump should have thought better about attacking Corker. After all, he still has a vote in the Senate, which Trump will need even if Senate Majority Leader Mitch McConnell (R-Ky.) uses the nuclear option to pass his border wall funding. He could decide to finally tell Trump to go f*ck himself and vote against his vanity project like when the late Senator John McCain triumphantly voted against Trumps’s effort to kill Obamacare.

Once again, Trump sticks his foot in his mouth and gets burned for it.