The United States Blues
Home Business Boeing failed to warn pilots about the automated system that could have... 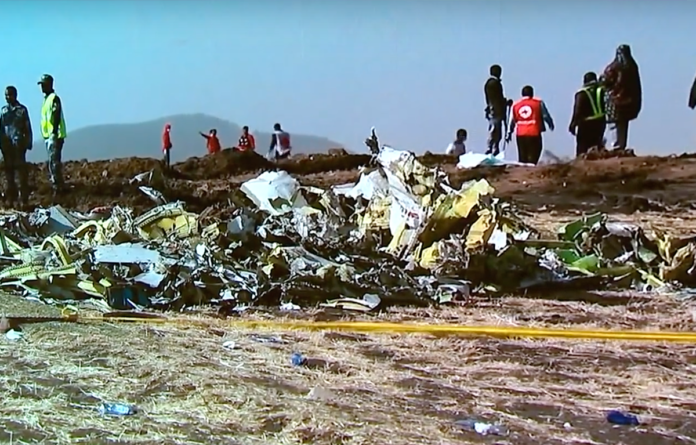 One of the best-selling airplanes in the world could have a potentially deadly flaw. Two brand new Boeing 737 Max8 jets have crashed shortly after takeoff within four months. Both crashes could have been caused by an automated system that took effect which pilots knew nothing about. In both crashes, the crews struggled to maintain control but crashed shortly after takeoff.

The crash on Sunday 40 miles south-east of the Ethiopian capital killed all 157 people onboard. According to the Guardian, the digital flight data recorder and the cockpit voice recorder have both been recovered from the wreckage, which will make it possible to determine what happened. Last October, Lion Air 610 crashed into the sea shortly after takeoff in Indonesia, killing all 189 people.

The Guardian noted that the Ethiopian crash killed 22 international UN staff headed to an important assembly.

“The victims of the Ethiopian Airlines flight came from at least 32 countries.”

“The largest number were from Kenya. Among the dead were 22 UN staff, many heading for an assembly of the UN Environment Programme in Nairobi.”

Ethiopia, China, Indonesia, and Cayman Airways have already grounded their Max8 jets. The United States and other countries could ground the planes as reports are coming in about an alarming problem. At least 354 of the planes are currently flying around the world.

When asked if he would feel comfortable flying on the 737 Max8, retired 777 pilot Les Abend said:

“I would feel uncomfortable. That’s the only way to put it,” said the former pilot.

The airliners who currently fly the planes in North America according to MSNBC are:

Preliminary investigations of the crash of Lion Air 610 last year show that the plane’s onboard sensors “may have delivered bad data to the plane’s computers, indicating the plane was going to stall,” according to MSNBC.

The computer system compensated by pushing the nose of the plane down in order to pick up speed, possibly catching the pilots off guard.

The pilots may have been trying to fight a new automated anti-stall system called the Maneuvering Characteristics Augmentation System (MCAS.) As they struggled to bring the plane’s nose back up, they had no idea that MCAS was in effect.

Boeing failed to tell the pilots that the new system was in effect, according to the new MSNBC report.

For pilots still flying the jets, they must learn immediately about how to disengage the anti-stall system, MCAS, should it begin to push the nose of the plane down. It’s something that they can do with the flip of cut-out switches. An emergency order from the Federal Aviation Administration (FAA) last fall intended to teach pilots how to disengage from MCAS.

Until investigations are complete, the cause of the crash of Ethiopian Airlines 302 is not known for certain.