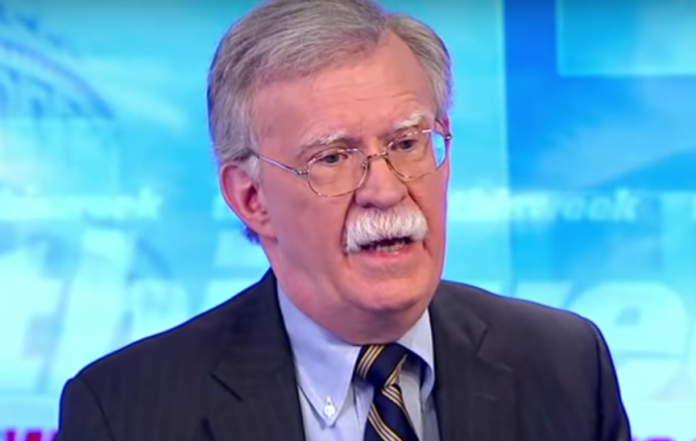 President Donald Trump and Vice-President Mike Pence have both declared that ISIS has been 100 percent defeated in Syria, but after the top American general on the ground there said otherwise, National Security Adviser John Bolton is insisting that Trump never said any such thing.

Back in December, Trump announced he would be withdrawing troops from Syria and boasted that ISIS has been defeated.

Trump went on to repeat his claim in February.

….The U.S. does not want to watch as these ISIS fighters permeate Europe, which is where they are expected to go. We do so much, and spend so much – Time for others to step up and do the job that they are so capable of doing. We are pulling back after 100% Caliphate victory!

Even Pence made the same claims just before ISIS perpetrated a bombing that killed four Americans in Syria, drawing criticism from Senator Lindsey Graham (R-S.C.) and from Fox News.

Not long after, CENTCOM commander General Joseph Votel confirmed that Trump is wrong about ISIS in Syria.

“The fight against ISIS and violent extremism is far from over,” he said. “What we are seeing now is not the surrender of ISIS as an organization, but a calculated decision to preserve the safety of their families and preservation of their capabilities in waiting for the right time to resurge.”

During an interview on Sunday, Bolton tried to rewrite history by denying that Trump never said that we have 100 percent defeated ISIS.

“The president has been I think as clear as clear can be when he talks about the defeat of the ISIS territorial caliphate,” he began before contradicting Trump’s claim. “He has never said that the elimination of the territorial caliphate means the end of ISIS in total. We know that’s not the case. We know right now that there are ISIS fighters scattered still around Syria and Iraq, and that ISIS itself is growing in other parts of the world. The ISIS threat will remain.”

“But one reason that the president has committed to keeping an American presence in Iraq and a small part of an observer force in Syria, is against the possibility that there would be a real resurgence of ISIS, and we would then have the ability to deal with that if that arose,” he continued. “So, I think people have to be clear.”

“And the importance of the territorial caliphate goes to an ideological point at the center of ISIS’s theory of itself, namely that they were a caliphate because, under their view of what a caliphate is, you have to control territory,” he concluded.

NEW: John Bolton responds to CENTCOM commander Gen. Votel saying the fight against ISIS is “far from over” after Trump said “100 percent” of ISIS was defeated: “(Trump) has never said that the elimination of the territorial caliphate means the end of ISIS” https://t.co/2HNDlHWIkE pic.twitter.com/v1sexsnqV3

Clearly, Trump is lying when he says ISIS has been defeated. And Bolton is lying about Trump’s lies.