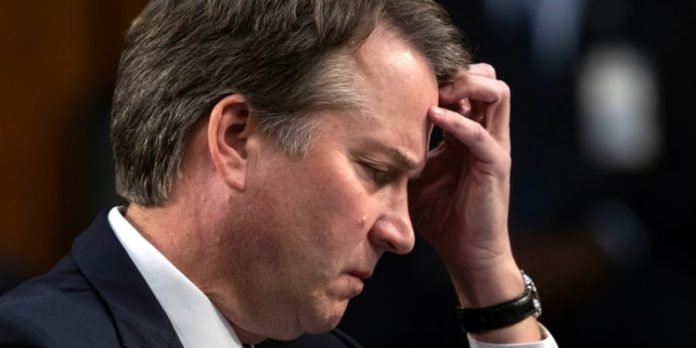 Brett Kavanaugh may be a Supreme Court Justice now, but that doesn’t mean his scandalous past just goes away, and it’s coming back to bite him again after a report based on ten months of investigation by the New York Times revealed yet another incident of sexual misconduct complete with an eyewitness.

In 2018, Dr. Christine Blasey Ford came forward with sexual assault allegations against Kavanaugh detailing he attempted to rape her at a party, but was stopped by his friend long enough so she could escape the room.

Other women, including Deborah Ramirez, also stepped forward to share their stories as well. But Republicans didn’t care, and chose to confirm Kavanaugh anyway in the name of Supreme Court dominance all while accusing the women of lying.

Well, New York Times reporters Robin Pogrebin and Kate Kelly spent ten months investigating the allegations by Ramirez and found them to be quite credible.

“During the winter of her freshman year, a drunken dormitory party unsettled her deeply,” the pair of journalists wrote. “[Deborah Ramirez] and some classmates had been drinking heavily when, she says, a freshman named Brett Kavanaugh pulled down his pants and thrust his penis at her, prompting her to swat it away and inadvertently touch it. During his Senate testimony, Mr. Kavanaugh said that if the incident Ms. Ramirez described had occurred, it would have been ‘the talk of campus.’ Our reporting suggests that it was.”

“At least seven people, including Ms. Ramirez’s mother, heard about the Yale incident long before Mr. Kavanaugh was a federal judge,” the duo continued. “Two of those people were classmates who learned of it just days after the party occurred, suggesting that it was discussed among students at the time.”

Kavanaugh’s testimony under oath could land him in hot water if Democrats take back the Senate in 2020. Lying to Congress is perjury, which is an impeachable offense.

And it turns out the New York Times uncovered yet another instance of Kavanaugh not being able to keep it his in pants, and this time there’s an eyewitness.

We also uncovered a previously unreported story about Mr. Kavanaugh in his freshman year that echoes Ms. Ramirez’s allegation. A classmate, Max Stier, saw Mr. Kavanaugh with his pants down at a different drunken dorm party, where friends pushed his penis into the hand of a female student. Mr. Stier, who runs a nonprofit organization in Washington, notified senators and the F.B.I. about this account, but the F.B.I. did not investigate and Mr. Stier has declined to discuss it publicly.

So, the FBI sat on this information as the Senate looked into the allegations against President Donald Trump’s nominee. Had the Senate received the information, they could have called Stier to testify.

This investigation proves that the FBI and Senate Republicans failed to do their due diligence and ended up putting a predator on the highest court in the land. Kavanaugh is now is the perfect position to continue terrorizing women from the bench, which he has already been doing with his votes against abortion rights.

And if there’s one more thing to take from all of this, it’s that Senator Susan Collins (R-Maine) deserves even more shame for voting to put him there.