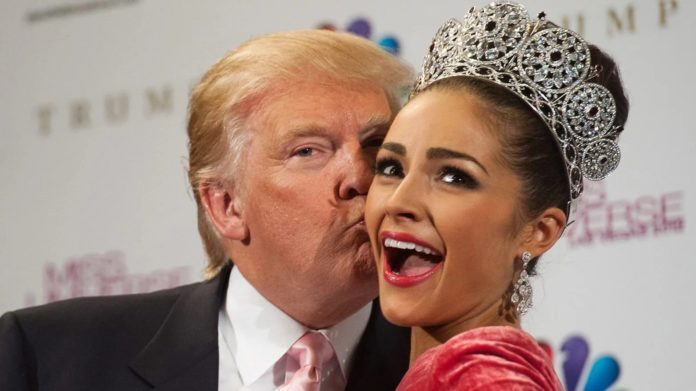 President Donald Trump is now accused of an additional 26 incidents of “unwanted sexual contact” and 43 instances of inappropriate behavior, according to an explosive new book, The Independent reports:

Karen Johnson spoke exclusively for the first time … about her claims of unwanted touching on the part of the president during a New Year’s Eve party in the early 2000s.

The co-authors of the book, Barry Levine and Monique El-Faizy, conducted over 100 interviews with women who have known Trump over the years for their book, entitled All the President’s Women: Donald Trump and the Making of a Predator. Excerpts from the book have just been published by Esquire magazine.

Part of the book details how Trump first met Melania Trump when she was 28-years-old and he was seeing numerous women:

Mr Trump asked one of them, Kara Young, to marry him after seemingly becoming infatuated with her. Ms. Young was dating Mr. Trump at the same time as Ms Trump, according to the new book, and reportedly used his credit card to shop in New York City’s SoHo neighborhood.

“She knew Donald thought differently about [Ms. Young] than the way he casually would date other women in the city,” AJ Benza, a celebrity reporter, said in an exclusive interview for the book.

Karen Johnson’s recollection of the night she alleges Trump assaulted her sounds a great deal like other allegations made against the president:

Shortly after glittering balloons fell from the ceiling at the stroke of midnight, her husband said he wasn’t feeling well and the relative was ready to go. Johnson decided to make a quick trip to the restroom before they headed home. “I hadn’t seen [Trump] that whole entire night,” said Johnson, who was in her late thirties at the time. “I was just walking to the bathroom. I was grabbed and pulled behind a tapestry, and it was him. And I’m a tall girl and I had six-inch heels on, and I still remember looking up at him. And he’s strong, and he just kissed me,” she recounted to us. “I was so scared because of who he was… I don’t even know where it came from. I didn’t have a say in the matter.”

Trump has repeatedly denied accusations of sexual assault or inappropriate contact made against him over the years. However, he was caught bragging on the infamous “Access Hollywood” videotape that he was fond of kissing women against their will.