The United States Blues
Home Elections Senator Booker explains what’s better than being ‘poor and innocent’ in our... 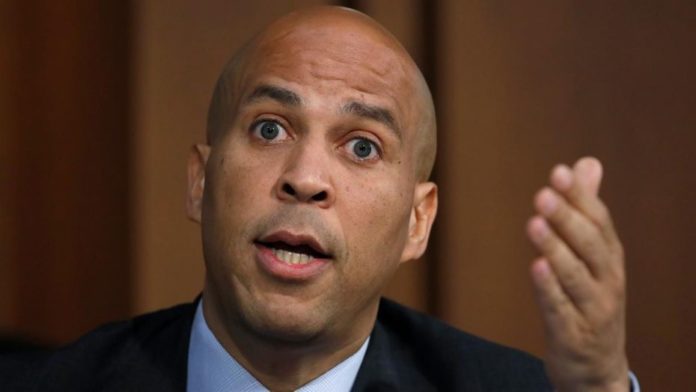 Recently, Paul Manafort, President Trump’s former campaign manager, came before a judge for sentencing. Though it ultimately transformed into a referendum on the criminal justice system, Manafort’s trial was originally the culmination of charges brought by the Special Counsel’s Office, and resulted in his conviction for a veritable 12 Days of Christmas of crimes:

However, when Manafort arrived for sentencing, a very different picture emerged. Though federal guidelines recommended at least 20 years and Manafort engaged in obstruction of justice after his conviction in August 2018, he was sentenced to just 47 months in federal prison.

And Senator Cory Booker is furious about it. Ramping up for his 2020 campaign, the presidential hopeful appeared on Stephen Colbert to say what he thought about a sentencing that many say highlight the blatant inequities of the criminal justice system.

The senator is not alone in his shock over the Manafort announcement. Rising democratic star Alexandria Ocasio-Cortez noted these inequalities by saying that in the criminal justice system, “justice isn’t blind. It’s bought.”

Paul Manafort getting such little jail time for such serious crimes lays out for the world how it’s almost impossible for rich people to go to jail for the same amount of time as someone who is lower income.

Other users pointed out that the length of Manafort’s sentence was far less than that of people who had committed far less serious crimes.

Manafort committed fraud and got 47 months.

In 2015, The Daily Beast highlighted a man named Fate Vincent Winslow sold $20 of weed to a stranger and got life. https://t.co/Wu70gUHOHk

And even others focused on the startling words of the judge at Manafort’s sentencing.

I sense this is what people find most shocking in what the judge said:

Though much remains to be learned of all the stances of the 2020 Democratic contenders, Booker has taken a lead on the criminal justice system and made it central to his campaign. And recently, he introduced sweeping legislation to fix it.

To Colbert, Booker said, “You can tell a lot about a country by who they incarcerate.”

And in the case of Paul Manafort, you can tell a lot about a country by who they don’t.