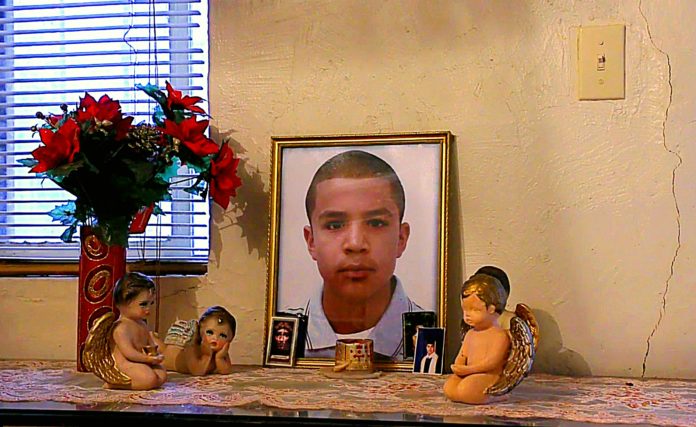 Swartz fired at Rodriguez on the U.S. side of the border wall 10 times.

Swartz was tried on second-degree murder charges and found not guilty, but the jury deadlocked on the manslaughter charges.

The Guardian UK reports prosecutors will retry the agent on voluntary and involuntary manslaughter charges:

“On Friday, prosecutors confirmed Swartz would be tried again, on lesser charges of voluntary and involuntary manslaughter. A date was set for 23 October.

On the eve of the announcement, the teen’s mother, Araceli Rodríguez spoke to the Guardian through an interpreter during a break in the monthly vigil held at the site where her son died in October 2012. ‘The trial for me was a fraud. It was a disappointment. It was something that was not fair, that was an injustice,’ she said, describing the verdict as ‘unreal.'”

Rodríguez’s mother described her feelings at the verdict as being just as painful as the death of her son.

Why did the agent fire through the wall?

Swartz described his feeling his life was threatened during the trial in this manner:

“At the first trial, Swartz admitted shooting through the border fence. His lawyers said his action was justified because it was in self-defense because rocks were being thrown from the Mexican side of the border.”

Why didn’t the agent back off a few feet to get out of range of a kid throwing rocks?

The agent is also seen on video reloading. This video evidence was not a part of the first trial. In all, 16 rounds were fired at Rodríguez.

Swartz remains on unpaid administrative leave. The Guardian indicates what actions may be taken to ensure guidelines deter future tragedy:

“After the judicial action is complete, Customs and Border Protection (CBP) will determine whether administrative action is warranted, a spokesperson with the Department of Homeland Security’s office of inspector general, part of the team that indicted Swartz, emailed.

The CBP national use of force review board will also then review the shooting to determine ‘whether corrective policies or training procedures are warranted,’ the spokesperson wrote.”

Hopefully, justice will be served during the retrial.