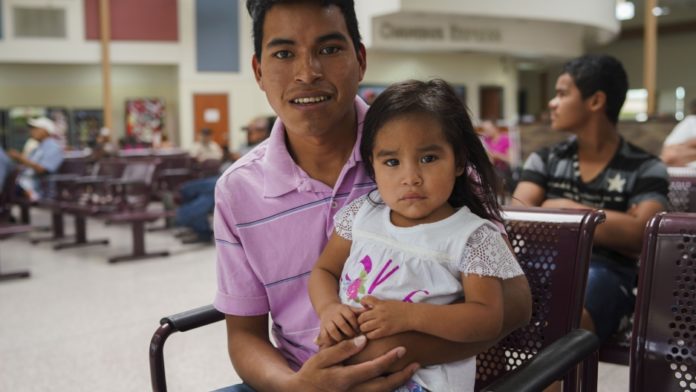 A Border Patrol agent allegedly forced a 3-year-old Honduran girl with a heart condition to choose which one of her parents she would be allowed to stay with at an immigrant detention center in El Paso, Texas, and then had to watch as the other parent was taken away by authorities, according to NPR:

“And the girl, because she is more attached to me, she said, mom,” her mother, Tania, told NPR through an interpreter. “But when they started to take [my husband] away, the girl started to cry. The officer said, ‘You said [you want to go] with mom.’”

The father was separated from his family and informed he would have return to Juárez, Mexico, and wait there for his court hearing before an immigration judge.

HuffPost notes that the family had entered the United States together:

The family of five had originally entered El Paso together in April but were then sent to Juárez to await their immigration proceedings. This procedure falls in line with the Trump administration’s Migrant Protection Protocols (MPP) program.

With the help of the Catholic organization Hope Border Institute and the Catholic Diocese of El Paso, the family returned to El Paso in late June to make a claim for asylum.

The child’s father, Joseph, says he feels utterly helpless as he waits for the day he will potentially be reunited with his family:

“We’re here at the mercy of the American people … We come here carrying only the little hope we have.”

The family left Honduras because they feared for their life:

The family fled Honduras after Tania  witnessed her mother get killed. Her sister-in-law also was a witness and was later kidnapped, tortured and slain to keep her from testifying. The gang MS-13 then posted a note on the family’s door telling them they had 45 minutes to leave, Tania said. That’s when the family left to seek asylum in the U.S.

Tania noted that she is seeking asylum in the United States because she has nowhere else to go:

“We cannot go back to Honduras. We hope that the children could study here because in Honduras there are no opportunities for the children to go to school, for them to grow. We are honest people. We don’t want to harm anyone. We just want an opportunity.”

These are the people President Trump says are a threat to the national security of the United States. Does a 3-year-old child with a heart condition sound like a threat to you?