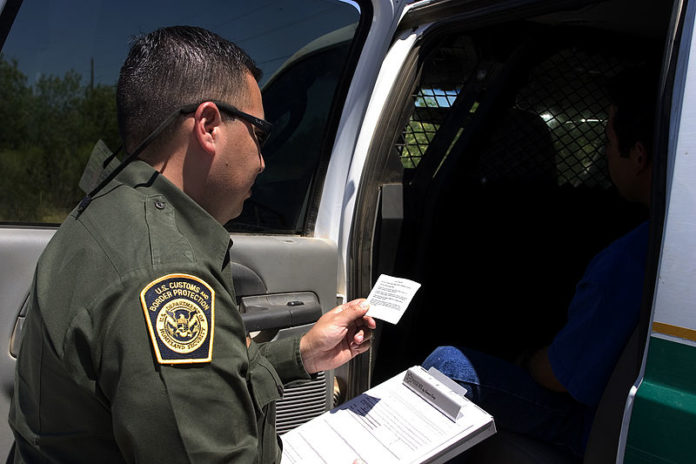 Border Patrol agents on the southern border stopped an American citizen this week who was on his way to work and put him through an ordeal that can only be described as a bunch of thugs with badges violating constitutional rights with glee.

Nate Abaurrea is a writer who travels to Mexico every week to do his job. He’s a white male with a passport and he’s never been flagged as a threat before.

But one day as he was following his same routine, five Border Patrol officers ganged up on him, forced him out of his vehicle and proceeded to interrogate, humiliate and intimidate him to the point where it became an example of bullying that should result in a hefty lawsuit.

In the aftermath of his ordeal, Abaurrea recounted the nightmare on Twitter.

He first asked the officers if they had probable cause but they refused to answer and proceeded with their power trip by interrogating him.

I was then ordered to put my hands down on a metal table. As my pockets were emptied by 2 officers, I again asked why I was being stopped. “What’s the probable cause here?” “We don’t need probable cause, sir,” another officer responded. “We can stop and search whoever we want.”

They then toyed with Abaurrea by demanding he show them his passport despite being ordered to leave his hands on the table. The lead Border Patrol officer even humiliated him by inappropriately snapping his underwear band and ordered him to take his shoes off after being challenged again.

I’m then ordered to show them my passport, which is of course in my wallet. I reach for it. “HANDS ON THE TABLE SIR! DON’T MAKE ME TELL YOU AGAIN.” “You just told me to get my passport.” “Uh-huh. Go ahead and pull it out and give it to me, then put your hands back on the table.”

West smiles. “You know what,” he says gleefully, “why don’t you take off your shoes for me.” “Can I move my hands?” “Take off your shoes, now!” (I quickly remove my shoes, as Amy Winehouse’s Back to Black Album plays faintly out of headphones still sitting on the table.)

Still not done, the lead officer then takes a picture of Abaurrea’s passport to continue the abuse.

“You’re free to go,” chimes in another officer, as West continues staring at me with a look of sweet satisfaction all over his face. I slowly collect my belongings and put my shoes back on. West still has my passport card. He then pulls out a cell phone and takes a picture of it.

Abaurrea felt violated and pointed out that if Border Patrol treated him like that, people of color must be treated far worse.

As I was standing in line at the MX crossing, I simultaneously felt like crying and punching someone in the face. Violated. At which time I started thinking about 🇺🇸 policing of People of Color, and how what I’d just gone thru was merely a taste of what POC go thru on the daily.

However, this whole ordeal didn’t feel one bit random. Very strange for 5 CBP agents to just be waiting to pounce right in that precise spot. The same spot where I’ve crossed for the last ten weeks. On the same day of the week (Friday). At the same time of the morning (9:15 AM).

He then suggested that Border Patrol ambushed him in retaliation for his reporting on the humanitarian crisis.

A certain @brooklynmarie, upon hearing about this earlier today, most certainly thought nothing of the sort. “I really don’t think that shit was random,” she said. “Congratulations, I guess.” Brooke’s car has been sent to secondary every time she’s crossed in the last two years.

Whether it was random or completely calculated, I got theoretically swung at today. And they landed one. Hard. For no reason other than to mess with me. But they didn’t knock me out. And they never will. As I said on @KPBS, I’m just living my life. This is my home. SD. TJ. 🇺🇸🖤🇲🇽

Clearly, Border Patrol has the kind of power that the Constitution forbids. Nobody should lose their 4th Amendment rights just because they live in a border zone or are crossing the border, especially American citizens.

Ever since the Bush Admin, Patriot Act, & creation of Dept. Homeland Security, the dangerous erosion of American civil liberties has worsened.

We’re melting away our Constitutional rights – all for the excuse of hating immigrants.

These agents should all lose their jobs. Donald Trump may be president, but that doesn’t give anyone the right to treat people like sh*t.