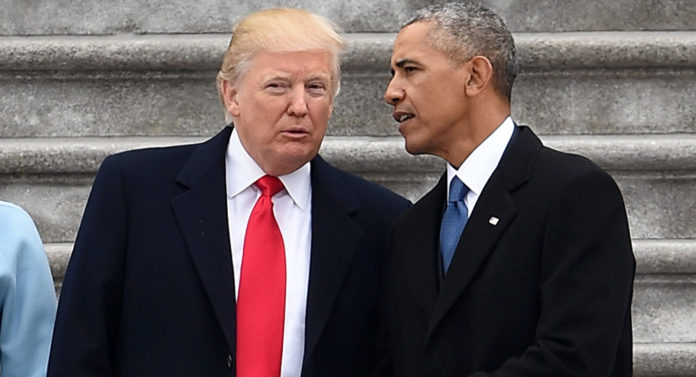 The former British ambassador to the United States reported back to his superiors last year that the reason President Donald Trump destroyed the Iran nuclear deal had nothing to do with diplomacy or national security and was instead an act of “diplomatic vandalism” predicated on one factor: Trump wanted the deal scrapped because it had been formalized by his predecessor, Barack Obama.

HuffPost reports that a leaked diplomatic memo shows that ambassador Kim Darroch believed Trump let his own personal weaknesses get in the way of conducting rational foreign policy:

In the latest leaked cables to his government, Darroch said the Trump administration was “set upon an act of diplomatic vandalism, seemingly for ideological and personality reasons — it was Obama’s deal,” the newspaper reported, referring to the Iranian pact.

“Moreover, they can’t articulate any ‘day-after’ strategy; and contacts with State Department this morning suggest no sort of plan for reaching out to partners and allies, whether in Europe or the region,” Darroch wrote, according to the Mail.

Darroch also noted that Secretary of State Mike Pompeo had been opposed to tearing up the nuclear deal with Iran:

Pompeo, Vice President Mike Pence and National Security Adviser John Bolton were unable to “articulate why the president was determined to withdraw, beyond his campaign promises,” Darroch reportedly wrote.

He said in a second cable that Trump signed a memo to withdraw from the pact “following a typically hyperbolic statement on the the nature of the ‘murderous’ Iranian regime,” according to the newspaper.

The memos from Darroch were written in May of last year shortly after then-British foreign secretary Boris Johnson had failed to convince the Trump administration to keep the Joint Comprehensive Plan of Action (JCPOA) with Iran in effect.

When the first diplomatic memos were leaked to the media a week ago, Trump attacked Darroch on Twitter:

The wacky Ambassador that the U.K. foisted upon the United States is not someone we are thrilled with, a very stupid guy. He should speak to his country, and Prime Minister May, about their failed Brexit negotiation, and not be upset with my criticism of how badly it was…

…handled. I told @theresa_may how to do that deal, but she went her own foolish way-was unable to get it done. A disaster! I don’t know the Ambassador but have been told he is a pompous fool. Tell him the USA now has the best Economy & Military anywhere in the World, by far…

Trump has not yet weighed in on the latest revelations from Darroch’s memos.