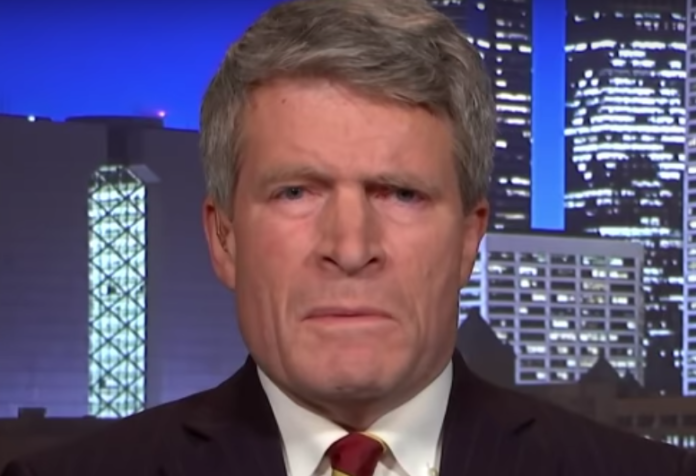 Former Bush ethics lawyer Richard Painter discussed President Donald Trump’s allegiance to Russian dictator Vladimir Putin this week, and warned that Trump could be getting blackmailed into destroying the United States from within.

So many bombshell revelations about Trump’s ties to Russia and Putin have dropped just over the last week that it certainly makes it look like Trump is a Russian asset.

The FBI opened an investigation into him under suspicion that he is working with Russia soon after he fired former FBI Director James Comey in May 2017, a probe that became the Russia investigation headed by Special Counsel Robert Mueller. Then there’s the fact that Trump has gone to desperate lengths to keep his private talks with Putin a secret, even taking notes away from his interpreter and not even telling his senior officials. There’s not even a classified file containing what was said.

And Trump stepped up his obsession with withdrawing the United States from NATO, is lifting sanctions on Russian oligarchs connected to Putin, and announced the withdraw of American forces from Syria, all of which benefit Putin.

Trump claims he is not working for Putin, but that’s hard to believe at this point. The question is why is Trump working so hard to make Putin and Russia happy?

During an interview with Salon, Painter opined that Trump may be a victim of blackmail.

“As far as I know this is unprecedented,” Painter said of Trump’s fealty to Putin. “People knew Trump had strange relationships with the Russians even before he was elected. Consequently, there is every reason to investigate whether Donald Trump is a Russian asset. I don’t know what the FBI has discovered about Donald Trump being a Russian asset. Either way, this is a very worrisome situation.”

Painter knows this because the Russian have been doing this kind of thing for decades, only they reeled in the biggest fish of them all this time by compromising a sitting president.

Painter went on to note that Republicans in Congress don’t care that Trump is a Russian asset because they care more about power than they do about the country.

He then addressed Trump’s private conversations with Putin and said Putin could have even more leverage over Trump if he wore a wire to record everything that was said while Trump employed desperate measures to get rid of any record of what was said.

“It may not be easy to get a lot of evidence of direct communication between Trump and the Russians, given that when he goes into a room with Putin he does not let anyone else in there at the same time, Painter initially warned. “Trump will offer his own version of events. But Putin could be wearing a wire and therefore has even more leverage over Donald Trump. This would be a very bad situation, because we do not know what Putin actually knows about Trump and what transpired in those conversations between the two of them.”

In the end, Painter concluded that whether Trump is a mere unwitting puppet or is a Russian asset, he is being used by Russia to destabilize the United States.

“It could be that Putin put Trump in the presidency knowing that he is just an unstable person to begin with,” he concluded. “But it could be true that Putin has information to leverage and blackmail Trump too.”

Again, this should deeply concern every American. But Trump’s supporters and Republicans in Congress don’t care if Trump is a Russian stooge because they only care about keeping power, and they are apparently willing to be complicit in Trump’s scandal to keep it.

This is, by far, the worst scandal in American history. Russia has nearly succeeding in toppling our nation and our influence around the world. Trump has abandoned our allies and he has chipped away at our democracy and the rule of law to Putin’s benefit. Republicans are not going to do anything about it even if Mueller’s report is damning. So, it’s going to be up to the American people to remove Trump and every Republican from office so we can truly make this country great again. Because as long as Trump and Republicans are in office, Putin is the president. And that must not be allowed to stand.