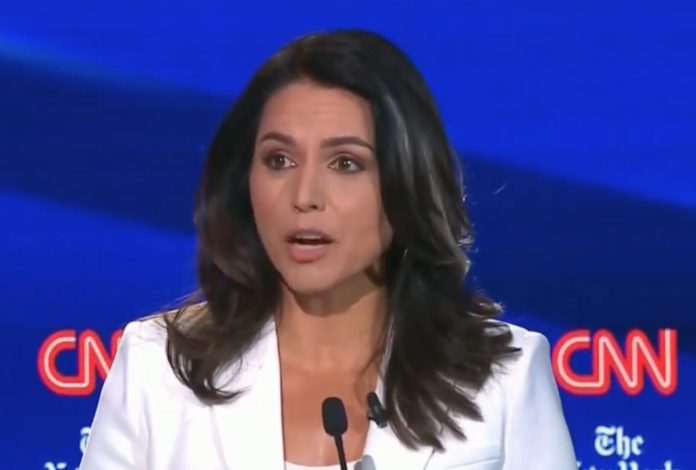 The Democratic debate held Tuesday evening in Ohio featured a great deal of policy ideas from the 12 candidates on the stage, but it was a confrontation between Rep. Tulsi Gabbard (HI) and South Bend Mayor Pete Buttigieg that has drawn the most attention.

When the debate turned to President Donald Trump’s withdrawal of American forces from Syria, Gabbard suggested that both Democrats and Republicans are responsible for wanting to stay “for an indefinite period of time to continue this regime change war.” She also falsely claimed that American troops have been arming members of the terror group Al Qaeda, a conspiracy theory that is often found in the Russian media.

Buttigieg was quick to correct Gabbard, telling her:

“You can put an end to endless war without embracing Donald Trump’s policy, as you’re doing. … What we were doing in Syria was keeping our word. Part of what makes it possible for the United States to get people to put their lives on the line to back us up is the idea that we will back them up, too. When I was deployed, not just the Afghan national army forces but the janitors put their lives on the line just by working with U.S. Forces. I would have a hard time today looking an Afghan civilian or soldier in the eye after what just happened over there. And it is undermining the honor of our soldiers. You take away the honor of our soldiers, you ever might as well go after their body armor next. This president has betrayed American values, our credible has been tattered.”

Gabbard was also shredded on Twitter, where many suggested she was only helping to strengthen Syrian President Bashar Assad and Russia leader Vladimir Putin:

Tulsi Gabbard’s take on Syria is completely false. US did not start the war in Syria nor did we initiate a regime change. US did not back al Qaeda in Syria. Why didn’t the moderators or other candidates challenge her on these falsehoods?

So yeah, Tulsi is an Assad regime apologist and a dangerous person.

Tulsi Gabbard blamed everyone except Assad for the loss of life in Syria.

It is a fact that the Russian talking point for years has been that the United States arms al-Qaeda in Syria. Tulsi Gabbard just said it on national television.

Say bye-bye to Tulsi Gabbard after tonight. She’s against impeachment, against addressing Syria and whines about how the mainstream media treats her. Reminds me of someone…. Her 15 minutes are up. #DemDebate

The good news is that Gabbard’s poll numbers are at one percent and falling. She has no chance of winning the nomination and shouldn’t be allowed on the stage for future debates.