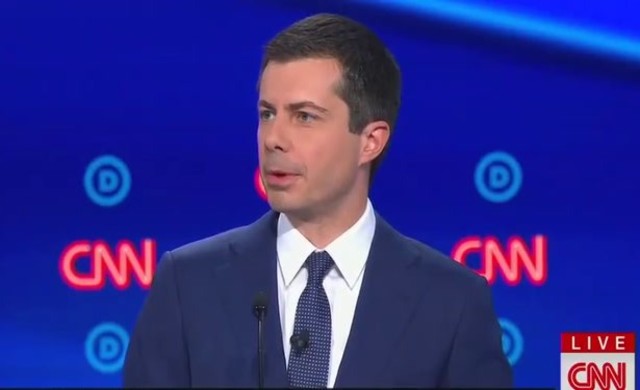 At Tuesday evening’s Democratic presidential debate in Detroit, South Bend, Indiana Mayor Pete Buttigieg publicly shamed Congressional Republicans who refuse to raise the federal minimum wage, using the Bible to remind them that a real Christian wants to help those who work but still can’t pay their bills.

Buttigieg was addressing the larger issue of trade and economics, and he began by noting:

“This is so much bigger than a trade fight. This is about a moment when the economy is changing before our eyes. There are people in economy who go through more jobs in a week than my parents went through in the lifetime. It’s why I’ve proposed we allow gig workers to unionize, because a gig is a job and a worker is a worker. We have to respond to these changes and, in addition to confronting tech, in addition to supporting workers by doubling unionization as I propose to do — some of this is low tech, too.”

Then Buttigieg focused in on the minimum wage, which hasn’t been increased since 2009:

“Like the minimum wage is just too low. And so-called conservative Christian senators right now in the Senate are blocking a bill to raise the minimum wage, when scripture says, ‘Whoever oppresses the poor taunts their maker.'”

Buttigieg: “So called conservative Christian senators right now in the Senate are blocking a bill to raise the minimum wage when scripture says that whoever oppresses the poor taunts their maker.” pic.twitter.com/kDpQBc7Imr

This isn’t the first time Buttigieg has used the issue of religion to shame Republicans for professing a belief in the tenets of Christianity while acting exactly the opposite, as Axios notes:

Buttigieg, who would be the first openly gay president in U.S. history if elected, has spoken openly about his Christian faith throughout the campaign. He has repeatedly attacked Republicans — including Vice President and fellow Indiana native Mike Pence — for what he has describes as ‘moral hypocrisy,’ arguing that religion is not ‘a kind of cudgel as if God belonged to a political party’ and that Democrats are fully capable of winning back evangelical voters.

It should also be noted that members of Congress make $174,000 a year, along with full benefits such as health insurance and retirement. Minimum wage workers help subsidize those same members of Congress who refuse to give them a raise. Maybe it’s time we paid those who supposedly represent us in Washington exactly what they think we’re worth. How long do you suppose Republicans would agree to serve if they were only making $7.25 an hour?