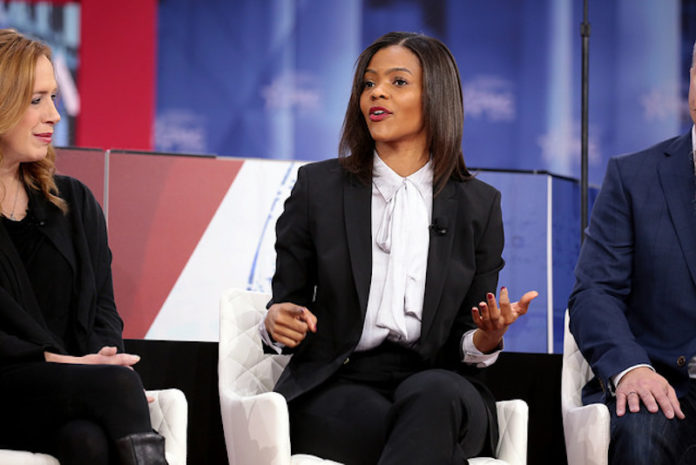 Adolf Hitler remains one of modern history’s most infamous villains, but also its most frequently misunderstood. Often, what Americans know about Hitler is that he was bad, with few specifics. This space leaves room for other narratives, like the one alt-righter Candace Owens recently tried out. Owens is also the communications director for the conservative advocacy group Turning Point USA.

The group’s founder, Charlie Kirk, is doing his best to bring his brand of firebrand advocacy against the left to the U.K., and Owens participated in the rollout of their British offshoot. According to Buzzfeed News, she responded to a question about nationalism in Western politics by saying:

“I actually don’t have any problems at all with the word ‘nationalism.’ I think that the definition gets poisoned by elitists that actually want globalism. Globalism is what I don’t want. Whenever we say nationalism, the first thing people think about, at least in America, is Hitler.”

Owens then delivered an awkward segue about the infamous Austrian dictator:

“He was a national socialist. But if Hitler just wanted to make Germany great and have things run well, OK, fine. The problem is that he wanted, he had dreams outside of Germany. He wanted to globalize.”

After the clip went viral, Owens claimed that objectors were taking her words out of context, even getting into a virtual tussle with former First Daughter Chelsea Clinton. However, it’s not clear what context she wishes to be used. She thanked USA Today for publishing her “full remarks”, but her full remarks were also present in Buzzfeed News’s original piece.

For a recap, Owens claimed:

Her stance is hardly surprising. Given her fondness for President Trump, who calls himself a nationalist, her comments are routine. But since the clip came out, the internet has taken Owens to task.

Some took a jab at her title — communications director:

Pro-tip: if someone has to keep saying “that’s taken out of context! That’s clearly not what I meant!” then maybe they’re not the great communicator they try to make themselves out to be.

Others pointed out that, contrary to the cultural image of Nazis, one of the defining features of Nazi sympathizers was Nazi apologia like Owens’ comments:

Candace Owens has no idea that these comments, which she is defending, justify Naziism & the Holocaust–as long as that's what "made Germany great" & stayed in Germany, I guess? Seriously, enough of these people, or pretending they wouldn't be fine Nazis. https://t.co/scyuvMk0RS pic.twitter.com/QPztynTiuE

And still others argued that Candace Owens, though proudly black, is not truly for black people at all:

Black conservatism right now is Candace Owens, Diamond and Silk. It's step n fetchit and a big reason why the vast majority of black folks aren't falling for that trash. pic.twitter.com/3jSFb4JOfJ

Owens has quickly established herself among a circuit of up-and-coming conservative pundits who hope to dominate the airwaves with their message. But her sympathetic comments about a man who killed over 6 million Jews lets us know exactly what kind of message it is.