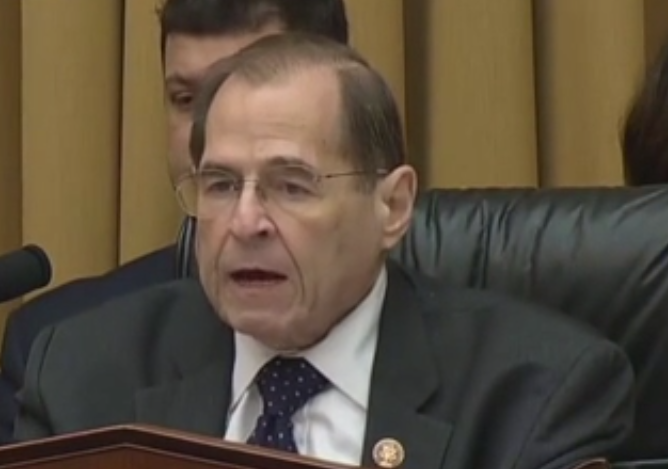 House Judiciary Committee chairman Jerry Nadler (D-N.Y.) threw the book at Attorney General Bill Barr on Thursday morning for refusing to show up and testify during a hearing.

Barr is all too happy to appear before the Senate Judiciary Committee where Republicans are in control and can protect him, but he faces tough questions in the House, which is controlled by Democrats.

As such, Democrats can decide how hearings are run, and they chose to let Barr be questioned by staff lawyers, who would be better suited to asking the kinds of questions dealing with legal matters such as the Mueller report and asking follow-ups.

Like a coward who knows he is cornered, Barr refused to show up, and excused his decision by claiming he objected to the “format” of the hearing.

Again, the executive branch does not have the power to dictate how Congress runs oversight hearings.

And because Barr skipped the hearing, Nadler rebuked him despite his chair remaining empty and threatened to hold him in contempt, which could result in him being arrested and jailed until he cooperates.

“We must come together to protect the integrity of this chamber,” Nadler began. “The administration may not dictate the terms of a hearing in this hearing room.”

Nadler noted that Barr is refusing to release the full unredacted Mueller report and is desperately setting terms to keep what he is hiding a secret from the American people, even if it means disrespecting Congress, which the Trump administration has repeatedly done by refusing to comply with subpoenas, something Nadler pointed out that no American can do.

“If we don’t stand up to him together today, we risk forever losing the power to stand up to any president in the future,” he warned. “The very system of government of the United States, the system of limited power, the system of not having a president as a dictator is very much at stake.”

He then threatened to hold Barr in contempt, which others have been calling for over the last week. And he made it clear that House Democrats are prepared to use the full extent of their powers to do their constitutional duty.

“We will have no choice but to move quickly to hold the attorney general in contempt if he stalls or fails to negotiate in good faith, but the attorney general must make a choice. Every one of us must make the same choice. That choice is now an obligation of our office. The choice is simple, we can stand up to this president in defense of the country and the Constitution and the liberty we love, or we can let the moment pass us by. We have seen in other countries what happens when you allow such moments to pass by.

If he does not provide this committee with the information it demands and the respect it deserves. Mr. Barr’s moment of accountability will come soon enough.”

There’s an empty chair for AG Barr as he skipped a House hearing.

“The challenge we face is bigger than a single witness,” @RepJerryNadler says, adding President Trump “is trying to render Congress inert as a separate and co-equal branch of government.” https://t.co/MHQ99Bwk8e pic.twitter.com/doGmTQpA55

Nadler and his Democratic colleagues are done giving Trump and his cronies chances to cooperate. Now they are going to play hardball.