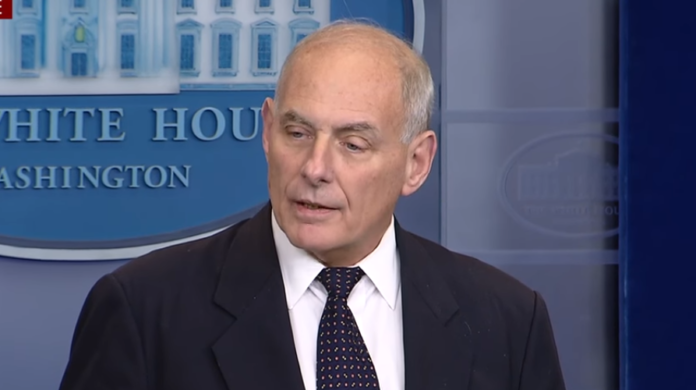 Chief of Staff John Kelly said Friday that the Trump administration’s overall handling of classified information and security clearances hadn’t been “up to standards.”

“In terms of the handling of classified material [the White House] wasn’t up to the standards that I’d been used to.

“Nothing illegal. But it wasn’t quite up to the standards.”

However, Kelly also offered an excuse for the lax handling of information that allowed staffers without security clearances to have access to classfied data:

“Most of the people here in the White House had never worked in government before.”

“The answer to that was a fair number. It was a lot. A couple of spreadsheets worth of people. More people than I was comfortable with.”

The issue of security clearances and FBI background checks has embarrassed the White House twice over the course of the past couple of weeks.

It began when Kelly’s top deputy, staff secretary Rob Porter, was unable to be cleared by the FBI due to two accusations of domestic abuse from his former spouses. Porter later resigned in disgrace after having initially been defended by Kelly.

Senior presidential adviser Jared Kushner also had his security clearance downgraded this week because federal investigators raised red flags over his numerous business dealings across the globe and connections to foreign entities he neglected to reveal in paperwork he filed with the FBI.

Despite these public humiliations, Kelly said he never once considered resigning, maintaining that he had “absolutely nothing to even consider resigning” for, despite the furor his misstep with the Porter matter caused the White House.

During the 2016 constantly chided his opponent, former Secretary of State Hillary Clinton, for her handling of classified information contained in emails, even going to far as to suggest that as president Clinton would be a national security risk.