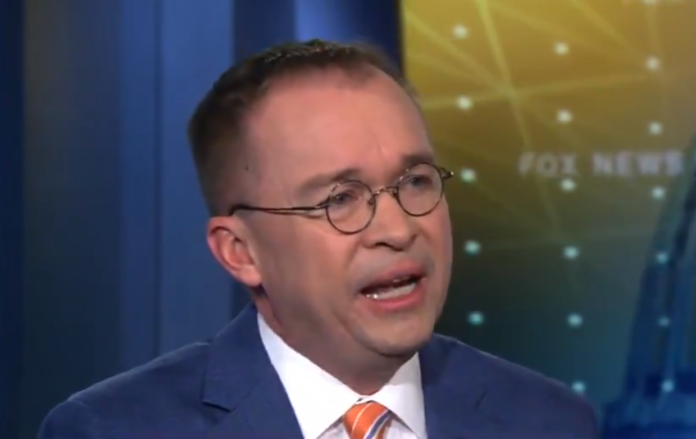 Acting Chief of Staff Mick Mulvaney made a bold prediction Sunday, declaring that Congressional Democrats who have requested six years worth of President Donald Trump’s tax returns will “never” be successful in obtaining them, adding:

Appearing on “Fox News Sunday, Mulvaney was asked about the request made this week by the Rep. Richard Neal (D-MA), chairman of the House Ways and Means Committee that the Internal Revenue Service (IRS) hand over Trump’s taxes, citing a 1924 law that clearly states  the treasury secretary “shall furnish … any return or return information specified” from the head of the committee. To that, Mulvaney replied:

“That is not going to happen and [Democrats] know it. They know the terms under law by which the IRS can give them the documents, but political hit job is not one of those reasons.”

MIck Mulvaney says that the democrats will never see President Trump’s taxes and that they know they won’t #FNS pic.twitter.com/DDjFmjGz8f

“That’s an issue that was already litigated during the (2016) election. Voters knew the president could have given his tax returns. They knew that he didn’t and they elected him anyway, which of course is what drives the Democrats crazy.”

Trump has repeatedly said that he’s unable to release his tax documents because he’s under audit by the IRS. Yet Mulvaney said Sunday that “the president could have given his tax returns,” which certainly seems to completely undercut Trump’s audit assertions.

“It’s not the law for the United States. We don’t have a requirement that presidents do that. This president decided not to because he has an ongoing IRS audit.”

EXCLUSIVE: President Trump’s attorney Jay Sekulow says Democrats pushing for the release of Trump’s tax returns don’t have a “legitimate legislative purpose”: “It’s not the law for the United States. We don’t have a requirement that presidents do that” https://t.co/koQUGuN2wR pic.twitter.com/0vbMPR44Q8

Trump’s repeated refusal to show his taxes certainly suggests there’s damaging information lurking in them, and Democrats have the law on their side. Time will tell if we see the president’s taxes before the 2020 election. If we don’t, that alone should be reason enough to deny Trump re-election.