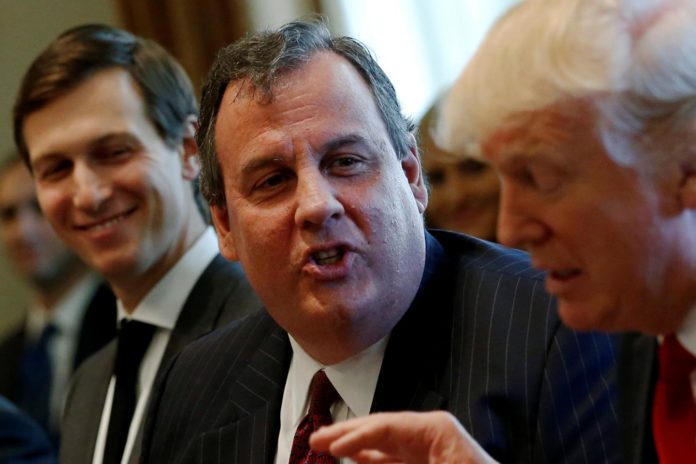 Chris Christie, who at one time was chairman of the Trump transition team, says the reason he was abruptly he was removed from that post was due solely to a vendetta on the part of Jared Kushner, whose father was prosecuted by Christie when he served as a U.S. Attorney.

In his new book, Let Me Finish, Christie accuses Kushner of carrying out a political “hit job” on him and notes that former White House adviser Steve Bannon confirmed that fact:

“Steve Bannon … made clear to me that one person and one person only was responsible for the faceless execution that Steve was now attempting to carry out. Jared Kushner, still apparently seething over events that had occurred a decade ago.”

In 2005, Christie, serving as a federal prosecutor, charged Jared’s father, Charles Kushner, with tax evasion and witness tampering. The elder Kushner served 14 months in federal prison for his crimes.

Christie also maintains that had he not been removed as head of the transition team and his plan for a smooth transition been implemented, the current administration wouldn’t be in constant turmoil. Instead, Christie says, his replacement, Vice President Mike Pence, used a  “thrown-together approach” that resulted in poor choices for people to fill top White House positions “over and over again.”

The Guardian, which obtained an advance copy of Let Me Finish, notes that Jared Kushner even badmouthed Christie to Trump while the former New Jersey governor was in the room:

“In one of the most visceral passages of the book, Christie recounts for the first time how Jared Kushner badmouthed him to Trump in April 2016, pleading with his father-in-law not to make Christie transition chairman. Remarkably, he did so while Christie was in the room.

“‘He implied I had acted unethically and inappropriately but didn’t state one fact to back that up,’ Christie writes. ‘Just a lot of feelings – very raw feelings that had been simmering for a dozen years.'”

Christie also recalls that Donald Trump often chided him for being overweight:

“Trump told the obese Christie he had to lose weight. Addressing him like one of the contestants in Miss Universe, the beauty contest organisation that he owned, Trump said ‘you gotta look better to be able to win’ in politics.”

While Kushner gets most of the barbs in Christie’s book, he also has some choice things to say about former National Security Adviser Michael Flynn:

“The author is scathing about Michael Flynn, the retired general who was briefly national security adviser before resigning over his dealings with Russia, and who is now cooperating with the special counsel and awaiting sentencing for lying to the FBI.

“In one of the book’s more memorable put-downs, Flynn is dubbed ‘the Russian lackey and future federal felon.’ Christie also calls the former general ‘a train wreck from beginning to end … a slow-motion car crash.'”

Let Me Finish will be in bookstores on January 29.