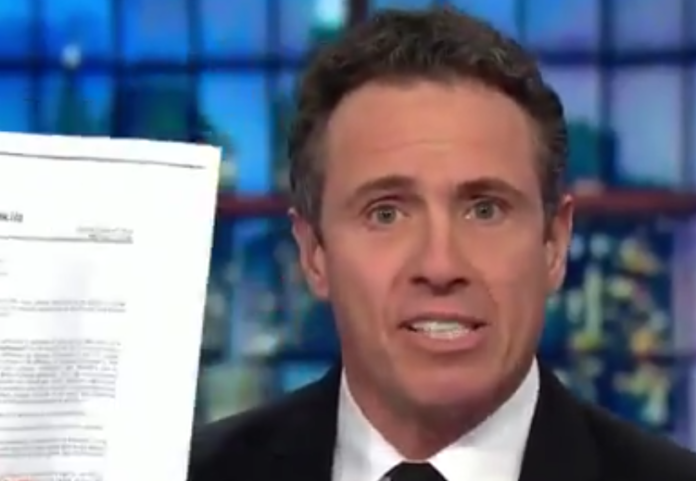 President Donald Trump and his lawyer Rudy Giuliani just got caught lying about the Trump Tower Moscow project by CNN anchor Chris Cuomo, who found a letter of intent signed by Trump himself.

After Trump’s former lawyer and fixer, Michael Cohen admitted that he lied to Congress for his client about the timing of when negotiations with the Russians for a Trump Tower in Moscow ended, which ceased in July 2016 instead of January 2016 as Trump claimed. Trump tried to distance himself from the deal by telling reporters that there was a letter of intent but that it was Cohen who signed it and not him.

Giuliani would sorta echo his client.

“It was a real estate project,” he claimed. “There was a letter of intent to go forward, but no one signed it.”

So, either Cohen signed it or no one did. As it turns out, both men lied because Trump’s signature is on the letter.

And Cuomo produced a copy of the letter on Tuesday night.

“Tonight, the facts fly in the face of the story, or at least the story the president would have you believe,” Cuomo began. “This is the letter of intent for the proposed Trump Tower Moscow, all right. It is signed by Donald J. Trump. How do I know? Well, because we have been told it was by his lawyer and it is, and I’ll show it to you.”

Taking a trip down “memory lane,” Cuomo reminded viewers that Trump once said there was no such deal for a Trump Tower in Moscow and showed video of Trump saying exactly that.

“For a deal that didn’t mean anything, that’s a lot of pages,” Cuomo remarked after playing Trump’s denials of having anything to do with Russia.

Cuomo described the document he held in his hand as having a lot of details, including what both sides want and how Trump would be paid.

“And there’s his signature,” Cuomo pointed out, holding up the document featuring a clear shot of Trump’s signature on the letter of intent that he and Giuliani have both said he didn’t sign.

“Here’s the letter,” he said. “Cohen didn’t sign it, the president did. Then this weekend the president’s esteemed lawyer said, quote, ‘It was a real estate project. There was a letter of intent to go forward, but no one signed it.’ Why are they doing this? This is Donald Trump’s signature. It’s here. We know this. Now, here’s what’s going on, this doesn’t matter legally. That’s the point. They’re not preparing for trial. Don’t examine it that way. They’re preparing for a PR campaign to convince you of what they want you to believe. Our job is to help you keep the facts front and center, and we’ll do that.”

“This is a very negotiated situation,” Cuomo concluded. “It didn’t bind anybody to anything. A letter of intent is just that. It means we’re going to try to make this happen. But it was very well negotiated.”

CNN obtains letter of intent for the proposed Trump Tower Moscow signed by Trump@ChrisCuomo: “This is a very negotiate situation. It didn’t bind anybody anything. A letter of intent is just that. It means we’re going to try to make this happen. But it was very well negotiated.” pic.twitter.com/b1F9dWf3DS

While it may not matter legally, the letter is just another piece of a pattern of Trump’s lies surrounding his connections to Russia that Special Counsel Robert Mueller can use against him to build a case. By itself, the letter may be innocuous, but Trump and Giuliani are knowingly lying about it despite the fact that copies of it clearly exist and clearly demonstrate that Trump signed it and is lying about it. That makes Michael Cohen more credible than Trump, which makes his witness testimony that Trump coordinated with and directed him to commit two campaign finance felonies to hide two extramarital affairs from voters during the 2016 Election far more credible.

Trump appears to think he has to lie about everything, and this lie just caught up to him and bit him on the ass. And it makes one wonder what else he is desperately trying to hide.