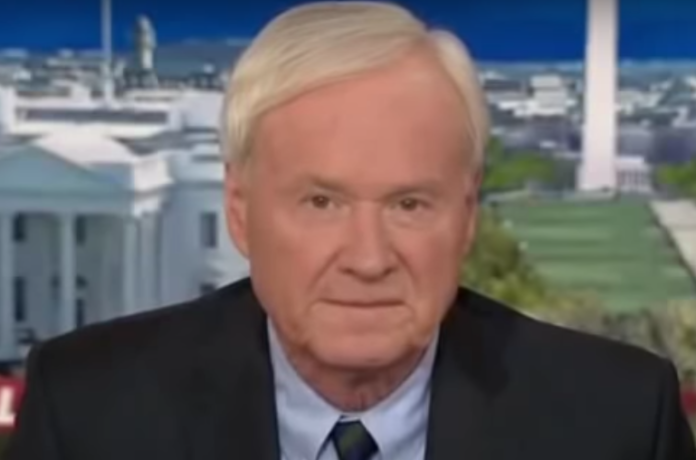 President Donald Trump repeatedly referred to the Mueller probe as an attempted coup to remove him from office during his speech to the National Rifle Association on Friday, and drew a sharp rebuke from MSNBC host Chris Matthews.

Trump has been desperate to write the history of the damning report that lists at least ten instances of obstruction of justice crimes he potentially committed to sabotage the investigation into Russian interference during the 2016 Election.

He has even gone so far as to call the probe a “coup,” which he not only did during an interview with Sean Hannity on Fox News Thursday, but again on Friday during a speech to the NRA that the audience ate up hook, line and sinker.

“They tried for a coup, didn’t work out so well,” Trump bellowed. “And I didn’t need a gun for that one, did I? You have been looking at things you wouldn’t have believed possible in our country. Corruption at the highest level. A disgrace. Spying, surveillance, trying for an overthrow. And we caught them, we caught them.”

Except that Trump’s spying claim has already been repeatedly debunked and his definition of a coup is very wrong, as Matthews would explain.

“A coup…is a violent overthrow of a government by force, usually carried out by the military in third-world countries,” Matthews said, citing coups in South Vietnam and Chile several decades ago as examples.

“A coup is not what happened in our country over the last two years and in making such frightening claims, Trump is using the language of a third-world dictator, debasing the very country he’s supposed to lead,” he concluded.

“A coup is not what happened in this country over the last 2 years. By making these claims, Trump is using the language of a 3rd world dictator: debasing the very country he’s supposed to lead.” @HardballChris on Trump saying there were attempted coups against him. #Hardball pic.twitter.com/nIEWEwnLbZ

Former President Ronald Reagan’s son Ron Reagan joined the program and expressed his concern that Trump is setting up a violent reaction from his supporters should he lose the 2020 Election.

“This is dangerous talk,” he began. “You notice the people at the NRA convention that he was speaking at there, they were not booing and they weren’t laughing, they were cheering that. They were eating that kind of stuff up. And I see it as a prelude of what might happen in the 2020 election if Donald Trump doesn’t win.”

Basically, Reagan warned that Trump is setting the stage to accuse Democrats of committing a coup after he loses so his supporters will commit acts of bloody violence to keep him in power illegally.

And it’s not a far-fetched scenario since legal experts are already preparing for Trump to undertake some kind of desperate stunt to stay in office, from declaring a national emergency to declaring the results of the election invalid so he can stay in office and avoid being prosecuted for his crimes.

Clearly, Trump is a threat to our democracy and will only become more dangerous as the election nears. That alone is worthy of impeachment, but since Republicans will refuse to be on board, if ever there was a time to vote, 2020 is it. This country needs to send an overwhelming message at the polls that cannot be challenged by Trump and his minions. The very survival of democracy and the rule of law is at stake.